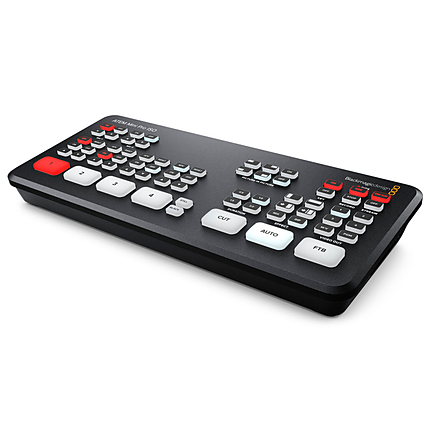 The ATEM Mini Pro ISO model makes it simple to edit live video while recording up to 5 video streams, including clean feeds of all inputs and the program recording, all at the same time. The video files include metadata tags such as synced timecode and camera numbers while opening up a world of editing options including new color grades, effects and graphics. Even the audio sources are all recorded so you can professionally mix & master audio in real time.

The ATEM Mini Pro ISO model can also save a DaVinci Resolve project file, so with a single click, you can open a live production as a video edit. All cuts, dissolves and media pool graphics will be loaded, this means you can fine tune edit points or even completely replace shots. The DaVinci Resolve Sync Bin allows for the selection of new shots via multiview, & relink to Blackmagic RAW camera files for adding professional color correction and finishing in Ultra HD.

4 independent HDMI inputs gives you full creative control over multiple video cameras. All video sources will re-sync to the switcher if they operate at different video standards, so you don't have to worry about connecting video devices.

The ATEM Mini Pro model has a built in hardware engine for live streaming via its ethernet connection. Live stream to YouTube, Facebook and Twitch in better quality, without dropped frames and with much simpler settings. Just select the streaming service and enter the streaming key. There are palettes in ATEM Software Control for streaming setup, and check out your streaming status anytime displayed in the multiview.

Layer live video over other video sources or graphics with the upstream keyer. You can use the luma key, linear key, pattern key, or shoot against a green screen and use chroma key to instantly composite the video over virtual sets.

The ATEM Mini switcher includes one downstream keyer, so you can add high-quality graphics like logos, bugs, and titles from the built-in media player over the live stream program output. Downstream keyers are the last layers of keying, so they overlay all video switched to the main program output.

The built-in audio mixer lets you control both camera and external audio with precision level and balance adjustments on all six available audio inputs and two channels. The mixer features selectable on/off and audio-follow-video per channel, plus it has separate gain control per channel, level and peak metering, and new Fairlight audio enhancements such as compressor, gate, limiter, six bands of parametric EQ, and master gain control.

The HDMI monitor output allows you to see your sources, graphics, preview, and program output on a single screen.

Eliminate external character generators by storing up to 20 broadcast-quality RGBA graphic files in the media pool. The one media player appears as input sources to your switcher. You can transition to graphics as full-frame video, or feed them to the keyers for overlaying video. Popular image formats such as PNG, TGA, BMP, GIF, JPEG, and TIFF are supported.