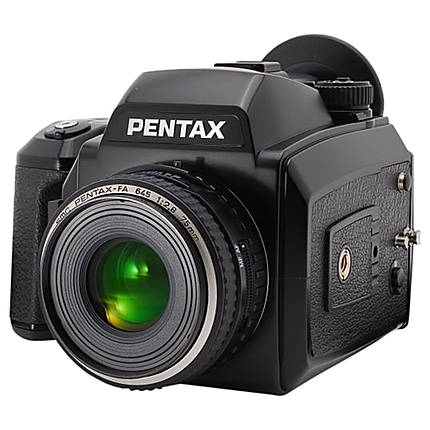 THIS IS A USED ITEM
IMAGES ARE FOR ILLUSTRATIVE PURPOSES ONLY
Condition: Excellent

The Pentax 645N gives you the feel of digital photography while providing results of an SLR camera. This camera comes with an SMC FA 75mm f/2.8 lens. It can also be used with Pentax AF-mount lenses. The camera features an auto-exposure mode that can be set to shutter priority, aperture priority, or to program AE mode. The Pentax 645N includes both three-point autofocus system and manual-focus mode. It has an electronic focal-plane shutter, having a maximum speed of 1/1000th of a second. This camera has an LCD panel that displays information about exposure, battery, film speed, ISO, and film counter. Other notable features in the camera include the self-timer and a hot shoe.

A Pentax SMC FA 75mm f/2.8 lens comes with the Pentax 645N SLR camera. The lens has six optical elements arranged in five groups. These elements have a super multi coating that improves contrast. Its autofocus system facilitates clicking pictures of subjects as close as 23.6 inches. The lens has an eight-blade diaphragm that brings rounded bokeh effects on images. The Pentax 645N incorporates its own three-point autofocus system, including phase-matching and switchable spot focusing. The camera has an auto-exposure mode that optimizes its settings based on aperture or shutter priority. There is also a program AE mode that decides the exposure by calculating values of both aperture and shutter speed. The camera has a maximum ISO of 6400, and its shutter can reach a speed of 1/1000th of a second.

The Pentax 645N has a Keplerian telescopic viewfinder with a matte-focusing screen. It provides a field view of 92% and 93% in the vertical and horizontal axes, respectively. The viewfinder also indicates the current focus setting, shutter speed, warning of high or low exposure, flash-ready indication, and other relevant information. A rectangle LCD is also integrated into the camera to show film speed, film status, exposure data, frame count, and battery-exhaustion warning.

This Pentax camera can be used with a variety of films, viz., 120, 220, and 70mm. It has a semi-automatic loading mechanism for 120 and 220 film rolls and a fully automatic one for 70mm films. The auto-winding film system uses the built-in motor to quickly prepare the frame for the next shot.

The Pentax 645N has a hot shoe with X-synchronization, which can be used to attach an electronic flash. When connected to the camera, the flash synchronizes at 1/60th of a second. The camera has a self-timer that lets you delay the shutter release up to 12 seconds. The camera works on six 1.5V lithium or alkaline batteries. Along with the camera, you also get a 120 film roll.