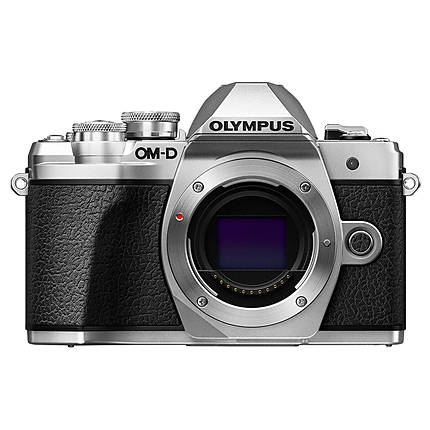 Step it up a few notches in your photography experiments by getting the Olympus OM-D E-M10 Mark III Mirrorless Micro 4/3 Digital Camera. With the Dual Quad-Core TruePic VIII image processor, the new camera outshines the previous Mark II. The latest Olympus camera has a 16.1 MP Live MOS sensor that works along with the image processor to generate pictures that stand out for their clarity and brightness. It also has a 5-axis image-stabilization system that reduces camera shakes to get you images that are blur-free. Five shooting-assist modes let you play with different moods and effects on your photos. The Mark III can shoot at 8.6 frames a second in the burst setting. It also has an inbuilt editing function that lets you trim out your videos and create photographs from the recorded 4K videos. This camera runs on a BLS-50 rechargeable battery, which, when fully charged, keeps the camera running for up to 330 shots.

The OM-D E-M10 Mark III camera from Olympus can be used with lenses that have a micro four thirds mount. There are 121 contrast-detection AF points that you could use for shooting different scenes and subjects, with focus on the entire scene, group, or an individual subject. The face- and eye-priority AF modes also help enhance the subject. With the mechanical shutter, moving subjects can be shot with clarity and no blurring. A silent electronic shutter makes it convenient to click wildlife photos. Additionally, the Mark III has a touch AF shutter function, with which you can select the focus point of the scene on the 3-inch LCD screen and simultaneously capture it without pressing the shutter button.

The Olympus OM-D E-M10 Mark III DSLR features a 16.1 MP Live MOS sensor that shoots amazing photos and videos of high quality. Further aiding in maintaining contrast and clarity in images is the Super Sonic Wave Filter that keeps the sensor spotless. You may view and analyze scenes through the OLED electronic viewfinder, which offers a 2.36-million-dot resolution, 100% screen coverage, and approximately 1.23× magnification. Secondly, the LCD screen lets you make alterations in the camera settings, while also help you shoot from high or low angles while viewing the scene.

The Olympus OM-D E-M10 Mark III boasts a TruePic VIII image processor that delivers impressive results even in low light. Under the Advanced Photography mode, you can choose from different functions like HDR, Panorama, Live Composite, Silent, Keystone Compensation, Live Time, Focus Bracketing, and AE Bracketing. Among the 15 art filters that can liven up a regular photograph is the new bleach-bypass filter. You may record videos in 4K as well as 1080p at 30p and 60p, respectively, with this mirrorless camera. For creating time-lapse movies, choose the interval-timer mode that allows shooting in 4K, 1080p, and 720p at 5 fps, 15 fps, and 30 fps, respectively.

The Olympus OM-D E-M10 Mark III camera can transfer the captured media to another device through its WiFi connectivity. Also, the camera has USB and type-D micro HDMI options for direct viewing of videos and photos on a computer or an HD television, respectively. You may pair up the camera with a smartphone for remote triggering and geolocation tagging on photographs. While the camera has a flash integrated into it, it also has a hot shoe for attaching an external flash like the Super FP and FL-50R. The camera runs on a BLS-50 Li-ion battery that enables it to shoot up to 330 photos and record videos continuously for 140 minutes.