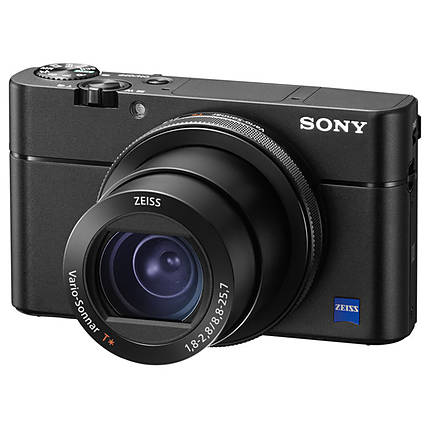 Compact in size and loaded with features, the Sony RX100 V Digital Camera is an ingenious gadget for everyone. It features a 20.1 MP, 1-inch Exmor RS BSI CMOS sensor that teams up with the BIONZ X image processor and front-end LSI to render high-resolution pictures and 4K videos without much effort. The Fast Hybrid AF uses 315 phase-detection AF points for a smooth, accurate focus in 0.05 seconds. The inbuilt WiFi and NFC connectivity facilities make it possible to instantly transfer imagery to numerous devices, as well as to cloud storage and social networking sites.

The Sony RX100 V Digital Camera comes with a built-in Carl Zeiss Vario-Sonnar T* 24-70 mm f/1.8-2.8 lens that is made of 10 elements in 9 groups, along with 9 aspherical elements, including AA lens. The Fast Hybrid AF makes use of 315 phase-detection AF points to get a smooth, accurate focus in just 0.05 seconds. Apart from the three light-metering modes, the exposure, shooting, and white-balance modes are useful for a variety of photography scenarios. Also, the silent electronic shutter operates at a speed of 1/32,000th of a second, while the maximum ISO sensitivity is 25,600.

The RX100 V from Sony is equipped with a 20.1 MP, 1-inch Exmor RS BSI CMOS sensor that can produce high-resolution stills and 4K videos. The 3-inch, Xtra Fine LCD screen, which can be tilted up and down at 180° and 45° angles, respectively, comes with a 1,228,800-dot resolution for viewing the captured content and accessing menus with immense clarity. The screen’s WhiteMagic technology enhances the display’s brightness for viewing subjects clearly, regardless of the lighting conditions. Also, the 0.39-inch, 2,359,296-dot OLED electronic viewfinder offers a coverage rating of 100%, so that you can view your subjects under scenarios where it generally becomes complicated to use the screen.

The RX100 V captures RAW and JPEG pictures at its maximum resolution of 5472×3648 pixels, as well as 4K videos at 30p in the XAVC S format. The BIONZ X image processor and front-end LSI render imagery with a blend of speed and quality. You can capture images at a burst rate of 24 fps. The face-detection technology assists you in detecting the exact number of faces while taking group photos, to ensure no one is left out. Moreover, the sweep-panorama function makes it possible to accommodate a large group of subjects within the camera’s frame by panning horizontally.

The inbuilt NFC and WiFi connectivity options in this camera enable you to instantly transfer your captured content to many devices with similar compatibility, as well as to cloud storage and social networking sites. The picture-effect and creative-style modes allow you to unleash your creativity on your pictures or footage. Powering this camera is a 1240 mAh NP-BX1 rechargeable Lithium-Ion battery pack.