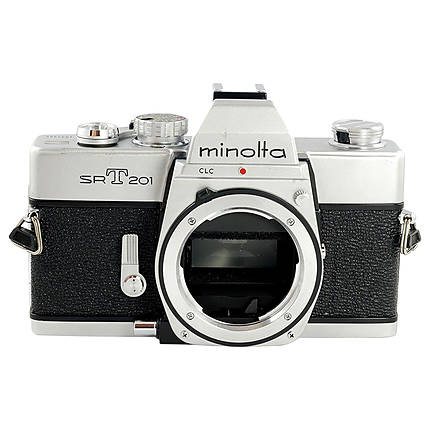 Good Condition:
Small amount of cosmetic wear and some blemishes.

The Minolta SRT 201 Film SLR Camera offers various upgraded functions from its predecessor such a hot shoe mount and a memo holder. This camera works with Minolta MD mount lenses. The camera uses the TTL CLC exposure metering that couples with shutter and film speed. You can boost the speed of the mechanical focal-plane shutter up to 1/1000th of a second to capture clear shots of objects in motion. A Mat-Fresnel-field focusing screen is incorporated into the camera, which has a split-image spot surrounded by a microprism band. The camera includes other features like self-timer, mirror lockup, and depth-of-field preview button.

This Minolta SLR camera is compatible with MD mount lenses. The Minolta SRT 201 SLR’s exposure metering utilizes the Contrast Light Compensator that adjusts the over-exposed image by reducing the extra brightness in the scene. Two CdS cells are incorporated in to the pentaprism finder to provide a working range of EV 3 to 17 at ASA 100. The camera film speed can be adjusted from ASA 6 to 6400. You can speed up the shutter up to 1/1000th of a second or slow it down to 1 second to capture crisp pictures of moving objects and take long exposure shots respectively.

The Minolta SLR comes with a fixed eye-level pentaprism viewfinder that covers 94% of the actual image. The Mat-Fresnel-field focusing screen has a split-image spot circled by a microprism band. You can see the camera-related information in the viewfinder such as exposure level, shutter speed, aperture number, and battery check. The camera avoids image cutoffs and ensures accurate exposure readings with its large return-type mirror.

The camera takes photos on 35mm film rolls. Rotate the quick advance winding lever at 150° in a single stroke or multiple strokes to advance the film. The self-additive counter denotes the number of exposed frames. Also, the exposure counter resets to the initial point when the camera back is opened.

The camera comes with a hot shoe to mount an external flash. You can synchronize an electronic flash with the shutter speed at up to 1/60th of a second and a flashbulb at all shutter speeds. The PC terminal can be used to connect wired flash units. With self-timer function, the shutter release can be delayed up to 10 seconds. This camera has a mirror lock mechanism to reduce motion blur caused by the vibrations during exposure metering. The 1.35v button-shaped mercury battery powers the exposure metering of the SLR. Press the battery check button to see whether the power cell is functional or not.