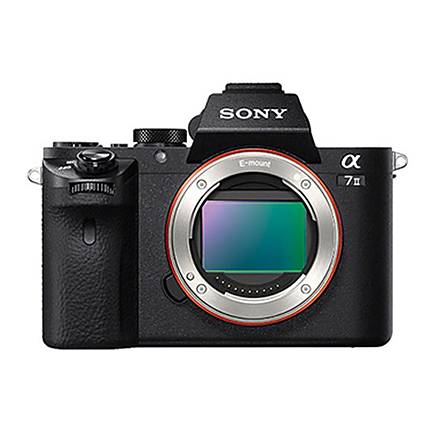 Integrated with a high-end BIONZ X image processor and the latest generation 24.3 MP Full-Frame Exmor CMOS image sensor, the Sony Alpha a7II Mirrorless Digital Camera - Body Only is a truly enviable model among its peers. The a7II Mirrorless Digital Camera is not just your average point and shoot camera. It is extremely lightweight and capable of capturing professional level photographs. Designed in a sleek black color, it is also very attractive to boot. This digital camera is a must-have for all professional photographers.

The Sony Alpha a7II is compatible with the revolutionary Sony APS-C E-Mount lenses as well as the new E-mount full-frame Zeiss and Sony G-series lenses. These lenses have a wide-angle range, which facilitates superior quality photo and video shooting. The superior lens mount system can also be employed to capture images in a range of angles from wide-angle landscapes to portraits to telephoto sports action shots. The image quality is augmented manifold due to the expansive focal length and more than competent aperture range of Sony’s E-mount and G-series lenses. The camera is also compatible with most levels of natural or artificial light and has a light sensitivity ranging from 100 ISO right up till 25,600 ISO.

The camera boasts of an advanced 24.3 MP Full-Frame Exmor CMOS image sensor for razor sharp image quality. The camera's sensor is fashioned in such a way that it works magnificently with the lens. This allows bright and clear images even at the long end of the zoom. It also has a wide 3.0-inch LCD touchscreen tilt-display with a complete 1,228,000 dot resolution that enhances your playback view.

Two special and highly innovative features included in the a7II are its BIONZ X image processor and 5-Axis SteadyShot INSIDE image stabilizer. These advancements offer incredibly quick shooting speeds, in-camera image processing, image resizing, and other unique in-camera options. The camera also boasts of ingenious filters, which enable artistic effects in the pictures captured. Another brilliant feature of this digital camera is its facilitation of a solid burst rate of up to 5 fps. The camera also allows one to easily capture 1080p full HD videos at 24 to 60 fps with astounding regularity. The video quality is further accentuated with an innovative motion detection system that selects swifter shutter speeds and better ISO light sensitivity for producing sharper results and negating adverse effects generated when the camera shakes. Face detection technology is also incorporated in this camera to base exposure and focus on up to eight recognized faces.

The Sony Alpha a7II Mirrorless Digital Camera - Body Only also features many imaginative and novel methods for enhancing the beauty of pictures and videos that are captured. These include numerous optimized scene selection modes, so that you can easily choose to shoot in portrait, landscape, night portrait, macro, sports action, sunset, night scene, handheld twilight, or anti-motion blur mode. Umpteen in-built editing controls are also accessible to apply finer touches to the images after shooting. The camera also boasts of in-built WiFi connectivity with NFC technology.

I feel the best thing about this new Sony mirrorless camera is the lenses. Since majority of them are manual focus only, Sony offers incredible focus peaking and zoom assistance. I have been using it for my portrait shooting assignments and a couple of street photography projects. And this Sony camera fits the bill perfectly. A definite thumbs up.

I recently ordered the Sony A7 II online. After using it for a couple of my projects, I can say that it is a complete package of ergonomics, lens selection, autofocus, etc. It gets the job done in a much more efficient and error-resistant way. The dynamics of the A7 II are a step in the right direction in the mirrorless segment for professional photographers. The new grip and location of the shutter button and custom function buttons are well designed and score brownie points over its predecessor. The body feels rock solid with a very dependable metal build. It is easily one of the best mirrorless cameras in the market.

I have been a photographer and videographer by profession for more than 3 years. I have been using Sony products for a long time and continue to be smitten with what the company has done to shake up the industry with the mirrorless cameras. Only a few years ago, the only option if looking to utilize the potential of a full frame camera was to get a large (and expensive) DSLR camera. However, I believe that Sony's A7 line has churned out one of the best mirrorless cameras in recent times. It is way lighter and easy to use as compared to the bulky DSLRs. It should be a definite addition to your photography collection.

This Sony mirrorless camera is worth buying. I also use an A7 and a couple of RX-1s. The image stabilization provided by the Sony mirrorless full-frame cameras clearly make them the market leader in the segment. The highly flexible eyepiece is very durable. The handling on this is great, better than the other ones I am using. The image quality so far is amazing. I still have not used it in low light conditions, mostly just natural light that is adequate to shoot at 400 ISO or lower. This one deserves a recommendation for sure.

I recently switched from a Canon 6D to this Sony mirrorless camera. My main reason to switch to mirrorless was the size and weight. I have had great results with the 6D with my go to lens. However, the combination is bulky, and it does not adapt so well to travel photography/ video and family snapshots. The Sony A7 II is easily one of the best mirrorless cameras in the market. The image stabilization is awesome, and it delivers good results. There are some challenges, but it can be easily worked around. A decent buy.