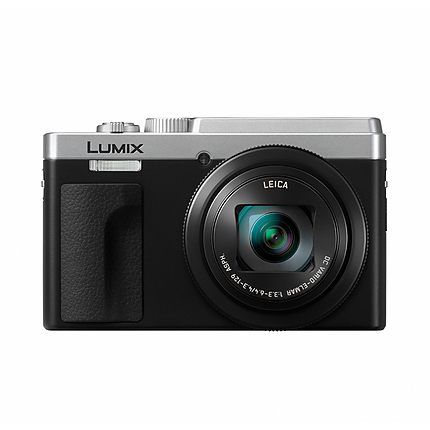 Camera:
The Panasonic LUMIX ZS80 travel zoom digital camera has a 30x optical zoom (35mm equivalent: 24-720mm) and a live viewfinder, all in a pocket-sized camera body. While able to shoot 4K Video /4K Photo, its 3.0-inch tiltable rear monitor also creates the ability of selfie shots, including 4K and panorama. The LUMIX ZS80 features a sharp 24mm ultra-wide angle, with its 30x telephoto LEICA DC VARIO-ELMAR lens, has a versatile zoom range, capturing virtually any subject, in any situation. Its POWER O.I.S. (Optical Image Stabilizer) compensates for hand shake, allowing you to minimize blur even in telephoto shooting. This camera incorporates a large 1/2.3-inch MOS Sensor with 20.3 Megapixel high-resolution, as well as high speed burst shooting at 10 fps (AFS) / 5 fps (AFC) to capture fast-moving subject just in-focus and for consecutive shots in RAW. Sequence Composition allows for you to create a stromotion image, by synthesizing multiple images taken at a fixed frame with 4K PHOTO. A unique image reflecting the subject’s motion can be produced in the camera without needing a special retouching process. This camera uses Bluetooth and Wi-Fi connectivity, which allows for a more flexible shooting experience with instant image sharing. A number of artistic functions are available with the LUMIX ZS80 Point and Shoot camera to add fun to the capturing of photos. Selfies can be shot in panorama, for selfies and group selfies with scenic backgrounds.

Optics & Focus:
The Lumix ZS80 features a 24mm ultra wide-angle 30x telephoto Leica DC Vario-Elmar 24-720mm (35mm equivalent) lens. When it comes to capturing landscapes, or distant subjects, the ZS80's zoom range makes it easy to capture virtually any subject, in any situation. Its Power Optical Image Stabilizer (O.I.S.) feature compensates for hand shake, and minimizes blur, even in telephoto. The Lumix ZS80's Zoom Compose Assist function helps regain your subject quickly when light is lost in telephoto, by zooming out when shooting.

Sensor & Screen:
The Lumix ZS80 has a large 1/2.3 inch 20.3 Megapixel MOS high-resolution sesnor, which improves performance in low-light conditions, keeping a high-quality image. With a large .21 inch (2,330K-dot) viewfinder, and a 3 inch (1040K-dot) 180-degree tiltable touchscreen monitor, there are a variety of options for selfie-shots, including 4K panorama.

Image & Video:
The Lumix ZS80 records high-resolution HD 4K video in 3840 x 2160 at 24p or 30p in MP4 format, as well as Full-HD 1920 x 1080 60p video in AVCHD Progressive or MP4 format with full-time Auto Focus. High-Speed video mode enables you to record a subject with fast motion in FHD at 120 fps, while Time Lapse/Stop Motion Animation are also available.

4K Photo lets you capture fleeting photo opportunities at 30 fps in 8 Megapixel equivalent resolution, by extracting the most photogenic frame from the 4K burst, creating a high resolution photo. Its Auto Marking function makes choosing your best shot, out of hundreds of frames, easier.

Sequence Composition creates the ability to make a stromotion image, by synthesizing multiple images, which were shot at a fixed frame with 4K photo. Other functions include Post Focus and Focus Stacking.

Other Functions:
The Lumix ZS80 integrates Wi-Fi and Bluetooth connectivity, giving you the ability to share images instantly. Download the Panasonic Image App to your smartphone or tablet to shoot and share images remotely, or to automatically add GPS geotag on your photos.