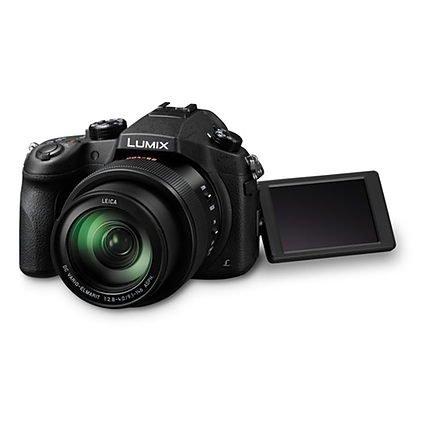 Camera:
The Panasonic Lumix DMC-FZ1000 is a bridge-style point-and-shoot digital camera, which features a 20.1 Megapixel 1 inch High-Sensitivity MOS sensor, as well as a Venus Engine image processor. These features enable high-resolution 4K QFHD video recording and rich still shooting up to 50 fps. The image sensor allows notable sensitivity, to an expandable ISO 25600, containing a high signal-to-noise ratio for a reduced image noise with cleaner image quality. This camera is designed for effective hybrid video recording and photo performance. The 4K output can also be used to allow in-camera screen grabs from video files for  an easy multimedia output. The imaging performance is complimented by its long-reaching 16x Leica DC Vario-Elmarit zoom lens, which provides a 35mm-equivalent focal length range of 25-400mm. This is able to cover wide-angle to telephoto perspectives. With a maximum aperture of f/2.8-4, this lens incorporates aspherical and extra-low dispersion elements, which create a clear, sharp image quality, with minimal aberration and distortion. HYBRID O.I.S. image stabilization also benefits working in difficult lighting conditions, by decreasing the appearance of camera shake, using five distinct axes. Using a linear AF motor, this lens is benefitted by Lumix Depth From Defocus technology to create a fast focusing performance throughout the zoom range.

Sensor & Screen:
The 20.1Megapixel 1 inch High-Sensitivity MOS Sensor, as well as the refined Venus Engine image processor, allow for high-resolution still image and 4K video recording with native sensitivity to ISO 12800, and can be further expanded to ISO 25600. These two technologies create a marked reduction in noise through the use of Multi Process NR, Aperture Filter, and Random Filter systems, to allow for consistent image clarity and color fidelity. The sensor and processor work together to create notable speed throughout the camera.

The audio is recorded by a built-in stereo zoom microphone in eithe Dolby or AAC formats, and an Auto Wind Cut function, as well as a zoom noise reduction system, helps to reduce internal camera noise and background noise during recording. A  3.5mm microphone input is available for using an external microphone, to create an even higher-quality, controlled sound.

Lens:
The Leica DC Vario-Elmarit 16x Zoom Lens is an expansive 16x optical zoom, and provides a 35mm-equivalent focal length range of 25-400mm with a maximum f/2.8-4 maximum aperture. The optical design has 15 elements in 11 groups, which includes five aspherical elements with eight aspherical surfaces, as well as four extra-low dispersion elements to help reduce chromatic aberrations throughout the range of the zoom. The effective range of the zoom lens, both Intelligent Zoom and Extra Optical Zoom (EZ) technologies work to increase the reach with minimal negative impact on image quality. Filmmakers will experience the speed of electronic zoom, which can be controlled within five different settings to better match the recording needs of the scene.

The HYBRID O.I.S. image stabilization feature helps to maintain steady handling with the long zoom lens when recording HD and Full HD movies, and minimizes the appearance of camera shake. The image stabilization system compensates for camera movement across five different axes-horizontal, vertical, axis of rotation, vertical rotation, and horizontal rotation to increase the experience of handheld recording. The Level Shot Function works to detect an image's horizon line, while maintaining it, even if the camera is tilted.

Other Features:
The camera's built-in Wi-Fi connectivity allows for seamless transferring of the user's images, from the FZ1000 to through the user's smartphone, using the Panasonic Image App. This app also allows direct sharing to social media sites. The connection between devices is made by using a QR code system, or through the use of NFC (Near Field Communication). This allows compatible devices to tap to connect. Mobile devices, which are linked, can also be used to geotag images in-camera, for plotting to interactive maps, and to remotely control and monitor the camera's focus, zoom, and shutter release from a distance.