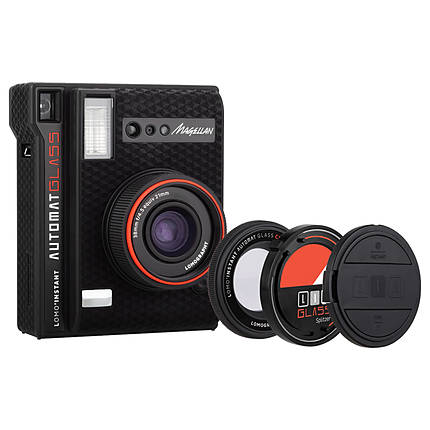 The Lomography Lomo Automat Glass instant camera is the right choice for preserving special moments in a tangible form. This instant camera works with the Fujifilm Instax Mini film. The camera lens is made with six optical elements in four groups. The Lomo Automat Glass features auto-exposure programs that set priorities based on the shutter, aperture, and flash output. The camera comes with a zone-focusing system and can click images of objects at a minimum focus distance of 0.3 m. A remote control shutter release is included, which lets you operate the camera from up to 5 m away. The camera has other useful features like bulb mode, multiple exposures, colored gel filters, an LED film counter, and a tripod mount.

The Lomography Lomo Automat Glass has a 38mm focal length lens that is designed with six optical elements arranged in four groups. The elements are multi-coated to reduce reflections and ensure sharpness and contrast. The f/4.5 aperture allows you to click images in low light without using the flash. This camera uses the zone-focus system that can be set to four focus ranges, viz. 0.3 m, 0.6 m, 1 m, and infinite. The camera’s shutter can speed up to 1/250th of a second. With the programmed auto exposure, it chooses the correct setting for the aperture, shutter, and flash according to the scene.

This Lomography camera comes with a direct optical viewfinder. Moreover, with the light-metering function, it can capture images in both bright and dim light.

The Lomography Lomo Automat Glass can be used with the Instax Mini film. Moreover, it offers multiple exposure modes for various kinds of scenes. The camera comes with colored gel filters that allow you to give a unique character to each captured image.

This camera from Lomography has a built-in flash that lets you snap pictures during the night or in dark areas. Also, the camera denotes the flash guide number up to 9 m. The camera comes with a remote control that can be used for triggering the camera from a distance of up to 5 m while shooting indoors and 2 m when outdoors. This camera also has an LED film counter and a motorized film ejection mechanism. Its tripod mount comes in handy when clicking portraits and landscape photos where a stable base is required. Two CR2 batteries are used for powering this camera. The lightweight design of this camera makes it easy to carry.