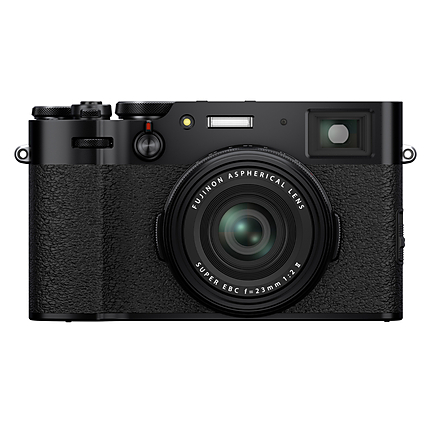 The Fujifilm X100V Digital Camera features Fujifilm's redesigned FUJINON 23mm f/2 Lens, which includes two, new, aspherical elements, for an improvement in sharpness & clarity, via the reduction of distortion, & spherical aberrations. The lens features a 23mm focal length, which is equivalent to 35mm, making it a wide-angle prime, that is suitable for a variety of shooting-situations. The FUJINON 23mm f/2 Lens features a bright, f/2 maximum aperture, which makes it suitable for working in various lighting conditions, while providing greater control over depth of field, during the use of selective focusing techniques. A Super EBC Coating has been applied to the lens elements, to suppress flare & ghosting, for greater color fidelity, & contrast, while shooting in strong lighting conditions. The FUJINON 23mm f/2 Lens maintains a fixed focal-length, but the X100V integrates 50mm & 75mm-equivalent Digital Teleconverter Settings, making the lens compatible with the, separately available, Fujifilm WCL-X100 II Wide Conversion Lens, & Fujifilm TCL-X100 II Tele Conversion Lenses (See Related Products - Right Column), to expand, or reduce, the effective field-of-view.

Included in the design, of the X100V's sensor, is an expanded, phase-detection autofocus system, which provides 425 selectable-points, that nearly covers the entire sensor-area. The AF System provides an even faster, & more-precise performance, in a variety of lighting conditions (Down To -5 EV). The AF System's fast speeds, are also fueled by the X100V's updated X-Processor 4, which has a quad-core CPU, for a more responsive performance, throughout the camera-system.

The Fujifilm X100V Digital Camera features an APS-C Format, 26.1 MP X-Trans CMOS 4 Sensor, which features a back-illuminated design, for an improvement in low-light performance, smooth tonal-rendering, & a wide native-sensitivity range, of ISO 160-12800.  The sensor's design, features a randomized pixel-array, to provide high-quality imagery. Due to the design, of the X-Trans Sensor, the X100V is able to produce more nuanced colors, & tonal transitions, while reducing moiré & aliasing. The sensor mimics the organic-nature of film, for spectacular results.

Several Film Simulation modes, which are designed to mimic the look, & feel, of Fujifilm's "classic film" types, are provided, to further-enhance the creative-possibilities in your images. Provia, Velvia, Astia, Classic Chrome, Classic Neg, PRO Neg, Eterna, Acros, B&W, & Sepia simulations, as well as a "Grain Effect" mode, Color Chrome, & Color Chrome Blue effects, allow you to replicate the look of older, film photos, with an organic, textured appearance. This appearance is especially noticable in prints of the captured images.

Great camera but too many commas

Great camera. But who is your comma guy? Why are there so many commas in the description? Wayyyy too many commas - it nearly broke me. Anyway, carry on.