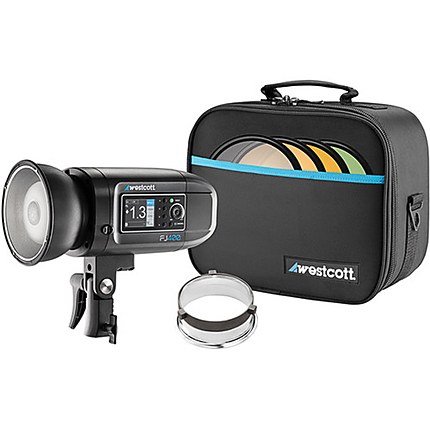 Westcott continues to push the envelope with the introduction of the FJ400 400Ws Strobe with AC/DC Battery. This version of the flash head has a power cord with a plug that's designed for use in the US and North America. The flash head recycles in just 0.9 seconds at full power - an impressive spec for a battery-powered light. Its 9-stop power range makes it readily adaptable to a variety of situations, as do High Speed Sync, Rear Curtain Sync, and TTL capability. Speaking of TTL, the FJ400 radio receiver is compatible with many Canon, Nikon, Sony (with adapter), FUJIFILM, Panasonic Lumix, and Olympus cameras, as well as the Canon RT flash system. With separate purchase of the FJ-X2m Universal Wireless Trigger, you can make power and exposure compensation adjustments at distances up to 985'. The wireless system offers 16 channels with 10 groups to prevent interference with other photographers or to shoot several individual setups.

The FJ400 runs on a powerful, removable 14.8V, 4400mAh lithium-ion polymer battery that will give you 480 full and thousands of low-power flashes on a 2.5-hour charge. The battery has LED status indicators to keep you appraised of remaining power. A 20W LED modeling light is employed for minimal power drain. Alternatively, when you're shooting in the studio you can run the flash head with AC current using the included adapter. The FJ400 ships with a magnetic 5.5" reflector with three CTO filters to match other fixtures, warm ambient light conditions, or just for creative expression. A magnetic diffusion filter is included to soften the output, as is an insert that allows use of any of Westcott's Rapid Box Switch softboxes. A custom-made travel case is also provided for storage and transport.

The FJ400's built-in TTL receiver is compatible with many Canon, Nikon, Sony (with adapter), FUJIFILM, Panasonic Lumix, Olympus cameras, and the Canon RT flash system. Make adjustments to the FJ400 from distances up to an impressive 985' with the separately-purchased Universal Wireless Radio Trigger.

The FJ400's 14.8V, 4400mAh lithium-ion polymer battery is a removable power source that will provide 480 full power flashes on a 2.5-hour charge. LED charge status lights keep you appraised of the battery's remaining power. Alternatively, when shooting in the studio, you can power the light with the included AC adapter.