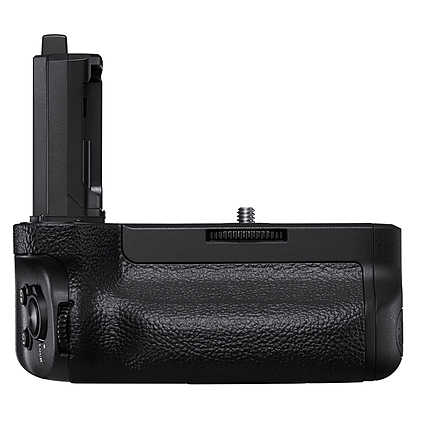 The Sony VG-C4EM Vertical Grip is designed specially for the Sony Alpha a7R IV, to provide comfortable vertical holding abilities, as well as operation of controls, while doubling the battery capacity & operation time of the Alpha a7R IV. The VG-C4EM Vertical Grip provides you with the same grip and controls to match the a7R IV's natural grip, allowing you to still have the same feel as the original a7R IV mirrorless camera. Sony's Vertical Grip also allows you to charge the (separately available) batteries via camera USB without having to remove the grip from your camera. Its lightweight, compact design matches the dust and moisture resistance of the durable Sony Alpha a7R IV.

Additional Power:
The provided space designated for two (separately available) NP-FZ100 batteries in the VG-C4EM Vertical Grip is featured to supply additional power, which doubles the effective operating time of your camera. This feature allows you to continue shooting in longer photo sessions, without interruption.

Reliability:
The controls, solidity of the magnesium alloy material, and dust/moisture resistance are designed to mimic these features on the a7R IV, in order to ensure a reliable system when in use.

Auto Switch:
When adding the 2x optional additional Z-Series batteries, the camera is designed to automatically switch from one battery to the other, allowing for continuous operation.

Comfort & Ease:
The Sony VG-C4EM Vertical Grip is specially designed to almost precisely match the grip and shape of the grip on the Alpha a7R IV itself, to provide a more comfortable grip, while enabling comfort during vertical shooting. The battery compartment features a tray-style design, which allows you to slide the batteries in with ease.

Matching a7R IV Buttons:
The improvements of the a7R IV's material & shape of its camera body have also been applied to the VG-C4EM Vertical Grip. The control improvements are designed to enhance the feel when control buttons are pressed, & include enlargement & optimized location of the AF-ON button, as well as a redesigned multi-selector. The grip features a broader design, which provides more room to work with to match the Alpha a7R IV itself.