Another Nail in the Coffin for Film 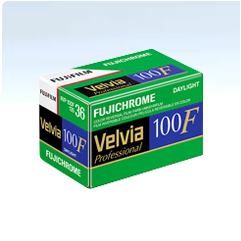 File this under "Unsurprising, but still disappointing"... Fuji has made a semi-official statement that they are discontinuing their Velvia 100F line, as well as most of its Velvia 50 film. While this hasn't made much of a commotion in the news world, it's a big deal to large format photographers who shoot chrome. Velvia 50 in 135 and 120 formats will still be available, but if Fuji continues to follow the trend of bad news, who knows when they will stop making chrome film altogether. Take this as a friendly reminder to stock up on your favorites before they're gone for good!

In lieu of discontinued products, Fujifilm seems to be phasing out the popular X100 camera...This could be a wink and nod towards an X200 at the next Photokina. Hey, you have to go digital or go home. Right Kodak?

What's going on in Kodak land? Nothing cheery. In an attempt to keep the ship afloat, Kodak is auctioning off 1100 of its prized patents. Apple, Microsoft, and Google are circling over these said patents like vultures and are forming coalitions to acquire them (Microsoft/Apple vs. Google/Droid Manufacturers). Kodak hopes to draw in $2 billion, but insiders are unsure they will reach that goal. Meanwhile ex-employees are outraged by the company's request to set aside $8 million in bonuses and deferred stock to 15 "key management employees" in charge of Kodak's restructure. The ex-employees who have written letters in protest say that this decision will threaten their pensions and benefits.

It's safe to say these are the dark days of film.