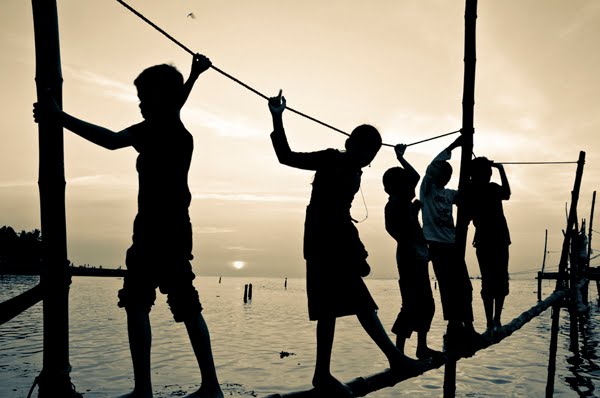 In this installation of Tamron’s Summer Travel Photography Series, Richard Martin offers tips and techniques for capturing some of the world’s most exotic people and places. Getting the chance to travel around the globe is a photographer’s dream, an unobstructed window into diverse cultures and lifestyles. Photographer Richard Martin uses his international travels (his favorite destinations include Cuba, Italy, and a recent journey to India) to tap into photography as a mode of communication. “Photography is more than just recording the world,” he explains. “It’s a medium of expression. I’m not so interested in the camera itself as in what it can actually do.” It can be easy, however, while you’re on the road thousands of miles from home to become overwhelmed by the cultural differences, travel logistics, and encounters with some of the world’s most iconic landmarks. Read on for Richard’s tips on the best ways to capture the flavor of wherever your international adventures may take you. Travel light. Keep it simple—there’s a big misunderstanding that you have to have two cameras hanging around your neck at all times to get professional-looking pictures. I’ve slimmed down my equipment after years of traveling—like with clothing, it’s very easy to overpack.

I carry two lenses: Right now it’s the Tamron 18-270 VC lens, an extremely versatile lens that gave me a lot of flexibility on the crowded streets on my recent trip to India, for example. I also carry the 10-24mm wide-angle lens. I pack a Lowepro Slim bag, my Nikon D300 with those two lenses, memory cards and chargers, and my laptop. One other thing: I bring a Canon G11 point-and-shoot camera, a high-megapixel camera that’s useful for grabbing situations without being too noticeable. Read up on your foreign destination. You should know where you’re going and where you want to go when you get there. Research your destination and take a guidebook with you (or make notes to bring with you so you can refresh yourself with the information you’ve already read). Always have your camera with you. This may seem obvious, but it’s surprising how many people don’t have their cameras with them when a great photo op suddenly presents itself. Maybe they got sick of carrying around too much gear or they’re just too tired from their lengthy travels, but don’t let yourself be caught without your camera. Don’t fall prey to overstimulation. When traveling to new surroundings, it’s important to be conscious of the negative aspects of being overstimulated: There’s a natural tendency to be less observant in general while engaged in exciting new situations. Ultimately, the challenge is to consciously observe beyond the surface of one’s own selective reality. Go where the locals go, wander around, and take in the whole experience. I love exploring and talking to the locals. Get away from the tourist traps and find out where the residents dine, where they go to hang out. Not only will you get better, less expensive food, but you’ll see things you wouldn’t normally see, which makes for more authentic photographs.

Always allow for the experimental part of wandering around—there are no wrong turns. Of course, you have to be safety conscious as well: I can wander the back streets of many places in Cuba, for example, but doing so in Jamaica isn’t as safe. I try to blend in with the local people and try not to look like a tourist. For example, in Italy, not a lot of people wear shorts. I can always tell when the tour groups have arrived at a certain location— they really stand out. I try not to look so obvious. Otherwise, it changes the way people perceive you and how they react to you. Slow down and enjoy the experience. One woman I knew would sit on the corner of a random street and do watercolor paintings for hours; occasionally she would take her camera out and photograph. Once you stay in one spot for a long period of time, you become forgotten, and then the pictures really start to happen. People come into your space, instead of you encroaching upon their space. Set well-known landmarks in your own context. Relate the photos that you make with your own experiences and impressions, instead of merely repeating what you see on postcards and travel brochures. One guy at one of my workshops only wanted to photograph postcard-type shots. He was so fixated on capturing scenes someone else had already captured that he wasn’t open to the world around him. Challenge yourself to find different angles for those iconic images. You can make that first shot you take a general kind of shot, but then shoot that same scene or landmark from different angles, using different lenses and focal lengths, at different times of day and night. Many people just take a couple of pictures and then move on—if you just slow down and keep taking pictures, you’ll get beyond the surface of the situation and show that landmark in a new light. 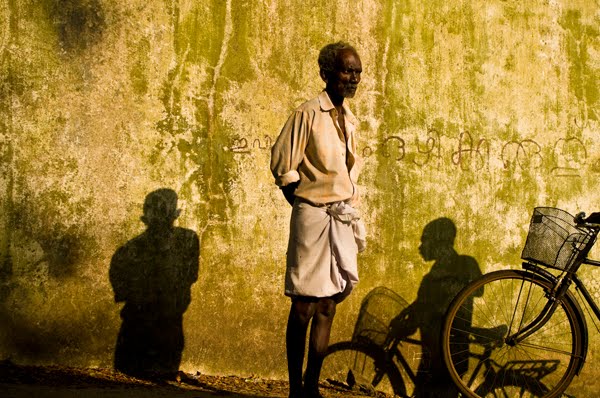 Use creative compositions and framing to tell a story. Sometimes the details of an image can say as much about the scene as the overall picture. Don’t be afraid to crop an image, for example, to get the essence of what you want to show in the photograph. I came across a vendor selling watermelons in a market in India: What caught my eye was the watermelon itself, but I wanted to show context and relationship, so I included the man selling the watermelon. I decided to crop out his head, though: If I had decided to include his head, it would have been a different picture that was all about him, not the watermelon.

The same went for a man standing against a wall, with the shadow of another man on a bicycle in the frame. I was attracted to the strong shadows and the warm quality of the late-afternoon light. I cropped out the second man with the bicycle, but I included his shadow to add a sense of mystery to the image. Finally, I was taking a picture of the shadows and colors of a village home when a curious child peeked through the doorway. I carefully zoomed back to include him in the composition, providing both context and balance to the design. What it comes down to is a good foundation in visual design. Turn your back on the obvious. I was watching some kids play soccer in Sicily. Everyone was photographing them running around, but I looked for a spot where no one else was. The beautiful, graphic of the sweep of the soccer net and the goalie’s hand peeking through the net said as much about my experience of watching these kids play soccer as a shot of them actually playing soccer. I told other photographers to come behind the net, but no one came. If everyone’s gathered around something, get away from it and find something even more interesting to shoot. Don’t always stick to your itinerary. Allow for a flexible itinerary in your travel plans to accommodate the unexpected opportunities and serendipitous twists that often transpire. Some of my best experiences and favorite images have occurred between selected points of interest. One of my favorite shots from my trip to India was an image of a bird whispering in the ear of a yak. We had finished photographing a school in this country town and were walking back to our vehicle when I glanced down a side street and saw these two yaks. I knew we were on schedule, but I had to head over to those yaks. The bird flew over (they pick the bugs off of the yaks), and there was my picture. It was a good example of being relaxed and open-minded. I didn’t go to India to get a picture of a bird in the ear of a yak, but because I wasn’t so fixated on my itinerary, I got this great shot. I was out walking one day before a workshop I was teaching in Venice when a woman shuffled by a church through a bunch of pigeons really slowly. Because it was raining, I had to stand under an umbrella to get the shot. I anticipated where she was coming to and took a bunch of pictures as she walked by. There was nothing special about this location—there was no iconic architecture, it was just the back streets of Venice. Yet it turned out looking like a scene out of an Alfred Hitchcock movie. The more I travel, the more I find that the most interesting photos I take are in uncelebrated areas in between going from Point A to Point B.

Establish rapport when shooting portraits abroad. I hadn’t really included many people in my images until I went on a trip to Cuba. There, I started adding them in as silhouettes and to add scale to the photos, to show relationship to their environment. In India, I started doing portraits. You have to talk with the people you’re photographing, establish a rapport. It’s disrespectful otherwise. It’s also important to get permission to take their photographs. Sometimes there are street scenes that you just have to grab, but generally, if I have someone in my viewfinder, I don’t just run up and start shooting. I make eye contact, and usually then there’s an interaction. I always think about how I’d want to be treated by someone with a camera. You can’t shoot portraits in a vacuum, either: I always look for secondary supporting elements to tell a story. I photographed a guy with a blue shirt standing in a doorway. There was a ripped poster on his right side that was interesting, so I made sure it made it into the photograph. I didn’t just want to do his portrait—I wanted to show him in context to his environment. Don’t be afraid to head out in bad weather. We’re conditioned by society to think that inclement weather is horrible for shooting. It can be amazing for taking pictures, however, with the reflections and the saturated colors. If you have an umbrella, hold the umbrella under your arm and just start taking pictures. I took a picture of a guy holding a pink umbrella as sort of a motion study: I used a really slow shutter speed (1/15th of a second) and moved my camera as he walked, keeping him in the same part of the frame, which gave me a nice blur. Recognize the quality of the light.

You need to learn how to deal with contrast ranges. For example, in India I didn’t take pictures on the sunniest part of the street—I would do it where the light was softer, maybe coming from one direction, like from an open storefront. I never use direct sunlight on my subjects unless it’s a morning sunrise or warm evening sunlight, where you have sidelighting and texture. I avoid harsh light, but if you can’t avoid it, use backlighting to create silhouettes. For an image I took of a guy walking through a bunch of pigeons, the light was fairly harsh, but I blocked out the direct part of the light and just used the shadows, creating contrast for a graphic shot. I used to use a spot meter in my camera; with today’s camera metering systems, I use aperture-priority matrix metering, and that works most of the time. I keep an eye on the histogram on my camera back, so I can tell if I’m going to be overexposed. Go outside your comfort zone. Photographers often get into a rut taking the same kinds of pictures wherever they go. Strive to go beyond the stereotypes. Have confidence in yourself and your vision. When you’re are open to new possibilities as a photographer, the world offers us many surprises.

For more of Richard’s work, go to www.richardmartinphoto.com.