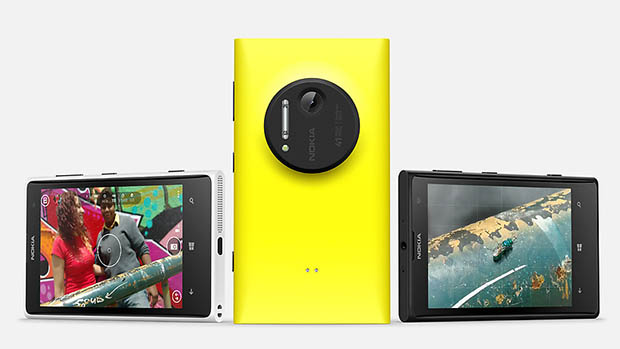 Rumors had been floating around of a fabled "EOS camera" from Nokia, but today they've officially announced the follow up to their 808 Pureview, the Lumia 1020. The 2nd generation looks to be improving on already impressive 41MP sensor, boasting it to be "the largest back side illuminated sensor available on a smartphone". More of a glorified camera than a phone, the 1020 will run on a photo-centric version of Windows 8 mobile...Good news for those who weren't a fan of the old interface. Other features include a six-optic Zeizz lens, manual shutter, 1080p video @ 30fps with 4x zoom, optical stabilization, variable powered xenon flash, and a 4.5" AMOLED Puremotion HD+ Display with tough Gorilla Glass 3 protection and super-sensitive touch capacity...which can sense when the user is pressing with their nails or while wearing gloves. Pricing at $300 with 2 Year contract with AT&T.

See your world in brilliant detail with the nokia lumia 1020 ONLY from AT&T AT&T* and Nokia announced today the Nokia Lumia 1020 featuring breakthrough PureView camera technology. Available exclusively from AT&T beginning July 26, the Lumia 1020 is priced at $299.99 with a two-year agreement and comes in matte black, matte white and matte yellow. Customers excited to reserve theirs can pre-order beginning July 16 at. For a look at the Lumia 1020's features in action, check out this video. The Nokia Lumia 1020 sets a new benchmark in imaging, combining easy access to the advanced features and controls usually reserved for professional cameras with the simplicity and convenience of a smartphone. This Windows Phone 8 device comes packed with an impressive second generation 41 megapixel sensor - the largest back side illuminated (BSI) sensor available on a smartphone - which lets you capture high-resolution photos and video and uniquely zoom-in or out and reframe the smaller details within your pictures. It has a 4.5-inch AMOLED PureMotion HD+ display (1280 x 768 pixels, 16:9 aspect ratio) made with Gorilla® Glass 3 and is super sensitive to touch even with fingernails or while wearing gloves. The Lumia 1020 is the first Windows Phone to include AT&T Locker, the free cloud storage app that lets you store and share your high-resolution images and video, as well as music, documents and more, in one convenient place. For a limited time, customers who purchase a Nokia Lumia 1020 can get 50 GB of free storage.** AT&T Locker is also available in the Windows Phone Store for Windows Phone 8 users. In addition, the Lumia 1020 has 32GB of onboard storage. Nokia Lumia 1020 runs on AT&T 4G LTE, which currently covers more than 200 million people; with plans to expand to cover 300 million people by the end of 2014. Meanwhile, AT&T was named America's fastest 4G LTE network, in PC Magazine's 2013 Fastest Mobile Networks study of 30 markets – and also swept the top rankings in all six U.S. regions from coast to coast: Northeast, Southeast, North-Central, South-Central, Northwest and Southwest.*** "AT&T has sold more Windows Phones than any other U.S. carrier and we're thrilled to add the Nokia Lumia 1020 to our growing portfolio," said Jeff Bradley, senior vice president – Devices, AT&T. "This smartphone will change the way you think about taking pictures, from its professional camera-like controls to the ability to zoom-in a photo you've taken to discover new details you missed initially. We were the first carrier to launch a 4G LTE Windows Phone smartphone with the Nokia Lumia 900 and I can't think of a better network to share and experience the impressive imaging capabilities of the Nokia Lumia 1020 than the nation's largest 4G network." The Nokia Lumia 1020 has second generation optical image stabilization (OIS), ZEISS optics with a 6-lens design, and other impressive specifications like a manual shutter and xenon flash to help capture high-quality photos with the least amount of effort, both day and night. Nokia Lumia 1020's impressive imaging capabilities are not limited to still photos. It records HD video in 1080p at 30 frames per second and lets you zoom in up to four times closer to the action with no loss of quality (up to 6x closer in HD 720p). Additionally, it is equipped with digital high-performance microphones that record high quality stereo sound with deep bass, even at loud events. Experienced photography professionals will appreciate the portability and convenience of having such a powerful camera in their pocket, while pre-installed tutorials provide novice users easy to follow lessons on using the manual camera controls for taking better photos. Nokia Lumia 1020 users also have access to Nokia Photo Masters, an online photography master class that includes device how-to's, tips, tricks and practical projects that allow you to develop your skills even more. To give you more control over how your photos turn out, the Nokia Pro Camera app lets you manually adjust flash, focus, ISO, shutter speed, white balance and exposure. Nokia Pro Camera lets you re-frame a photo to zoom in and out to discover new stories and reveal more context of the moment you captured. You can zoom, re-frame, straighten horizons, change orientation or make other alterations as many times as you want. You can also zoom in on images to discover details you couldn't see at the time of capture. If you want to share your photos with friends, the Nokia Lumia 1020 automatically creates 5 megapixel versions that are easy to share via e-mail, messaging or social media. The Nokia Lumia 1020 comes with an attachable point-and-shoot-like leather wrist strap to make it even easier to take anywhere you go. Additionally, you can purchase the Nokia Camera Grip accessory. This sturdy case snaps on the phone to mimic the feel of an actual camera and includes extra battery power, shutter button and a universal tripod mount. With a wealth of great features and technology made easy, Nokia Lumia 1020 will change the way you capture, edit and share pictures. For more information, visit www.att.com/Lumia1020.