TOKYO - Nikon Corporation is pleased to announce the release of the Wireless Mobile Adapter WU-1a, which enables simple sharing of high-resolution photos captured with a digital-SLR camera with smart devices (Android).

The WU-1a was developed to respond to the needs of users looking for an easy way to share high-resolution photos with other devices or people. This new photographic accessory enables collaboration with the smartphones, tablets, and other smart devices that have become so popular in recent years. By simply connecting the WU-1a to the D3200 DX-format digital-SLR camera, released at the same time as the WU-1a and equipped with a new CMOS image sensor with an effective pixel count of 24.2-million pixels, images captured with the D3200 can be transferred to smart devices over a wireless connection, and the camera's live view display can be shown in the smart device screen for remote control over shooting.

Nikon has equipped its digital-SLR cameras and NIKKOR lenses with a variety of advanced optical technologies, all developed and perfected with the work of many years. With the release of the new WU-1a, users can enjoy the beautiful images captured with Nikon digital-SLR cameras and NIKKOR lenses not only in the traditional ways of viewing in the camera monitor or on a computer, or by printing them out, but by connecting to a compatible wireless equipped smart device to transfer photos to family and friends, or upload them to blogs or social networking sites, regardless of the time or place.

Initially, the WU-1a is compatible only with smart devices running the Android OS. However, additional support for iOS is scheduled for release this fall. Digital cameras and lenses are not simply tools for recording photos and movies. The images recorded with digital cameras and lenses also serve as tools for communicating with others. Nikon continues to work hard to develop and expand the ways in which people use and enjoy their photos and movies after they are recorded by developing its online photo storage and sharing service, my Picturetown, and by releasing this new wireless mobile adapter, which can be effectively used in a variety of places and situations. 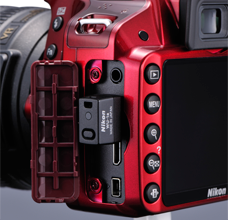 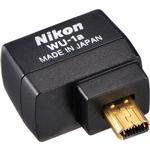