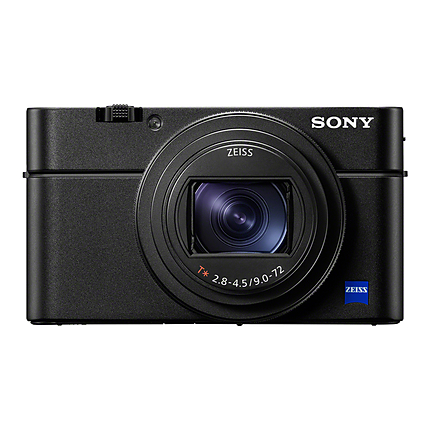 Total Resolution:
The full count of pixels on a camera's sensor.


The Sony RX100 VII Cyber-shot Digital Camera is a compact, fixed lens camera, that features a 1.0" 20.1MP Exmor RS BSI CMOS sensor, & ZEISS Vario-Sonnar T* Lens, in a compact physical design. The RX100 VII is designed with professional camera features, making it ideal for DSLR/Mirrorless owners who are interested in a premium point & shoot camera, as well as advanced amateur photographers who would like a camera for everyday use. The RX100 VII features a speed performance which is similar to that of Sony's Alpha a9, in a compact size. Real-time tracking & real-time eye AF, which are the latest AF technologies that Sony has to offer, are included in the RX100 VII.

The Sony RX100 VII also features the world's fastest hybrid AF system, which can achieve 0.02-sec. acquisition speed, while maintaining high accuracy on your subject. This AF system allows you to capture moments before they pass you by, with extreme precision. Also featured, are 357 focal-plane phase-detection AF points, which cover approximately 68% of the image area, which work with the included 425 contrast-detection AF points & high-density AF tracking technology, to follow even unpredictable moving subjects in a reliable fashion. Subject-recognition algorithms (AI) are used (ex: distance, color, brightness face/eye information/etc.) through the Real-Time Tracking function to help maintain a constant, steady focus on a moving subject during action, & allows you to capture it as its happening. Touch Tracking is also available for both stills & Movies.

The RX100 VII features a 3.0" (921k dots) LCD Display, which is designed to rotate in multiple angles to assist with capturing images & movie, which may require an above, or low-to-the-ground shot (ex: above a crowd, eye-level with pets, etc.). Selfies are also easier than ever with this display's tilting abilities. The LCD is designed to swing up approximately 180 degrees, & down approximately 90 degrees. The diplay's brilliant quality allows for enabling easy focusing operation, & the Monitor Auto OFF function can boost the maximum number of still images up by 30%.

Image & Video:
The RX100 VII's sensor is paired with a revised BIONZ X image processor, as well as a front-end LSI, to greatly improve the speed of the entire imaging system.  This duo enables blackout-free continuous shooting at up to 20fps, with continous AF/AE performance at 60 times per second. The Single Burst Shooting feature allows for recording up to seven frames in RAW, or JPEG, at 60fps or 30fps, allowing you to capture the fastest of moments with your camera. Its front-end LSI, combined with an enhanced sensor performance, improves overall image quality, even at higher sensitivities, allowing for noise reduction & higher resolution and color definition.

The Sony RX100 VII is designed to record 4K movies, with full pixel readout & no pixel binning, as well as oversampling for high image quality. The ability to extend continuous video recording is enabled when setting the Auto Power OFF Temp. function to High. Hybrid Log-Gamma (HLG) compatibility allows for HDR capture, & immediate playback, without post-production via connection to an HDR (HLG)-compatible Sony TV through a USB cable. The use of S-Log profiles allows for a wide dynamic & color space range, for increased creative freedom during post-production. Interval Shooting is available with AE tracking to reduce exposure variations, & the still images can be edited into a time-lapse movie on your PC.

"Active" mode image stabilization is available for 4K movies, allowing for optical & electronic stabilization methods to be combined, for compensation up to eight times more effective than the standard mode. "Intelligent Active" mode can be combined with Full HD recording for smoother stabilization while walking. An additional mobile app called "Movie Edit" can be used to achieve a smoothness in your recordings that is similar to using a gimbal.

The transfer of clean, uncompressed 8-bit 4:2:2 4K or HD movie signals to an external monitor/recorder can occur via the camera's HDMI terminal. Video can also be simultaneously recorded to internal media, & uncompressed video to the external recorder, in real time.