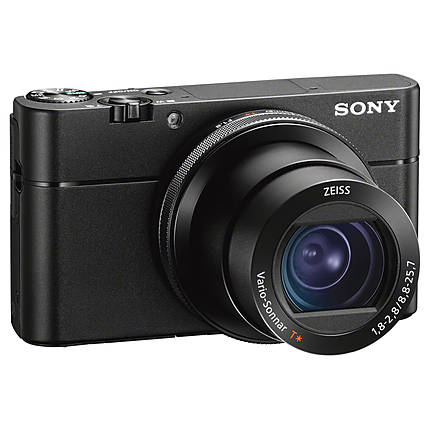 The Sony DSC-RX100 VA Cyber-shot Digital Camera features high-resolution imaging capabilities, along with faster AF performance than the previous version. Sporting a 20.1 MP Exmor RS BSI CMOS sensor and BIONZ X image processor, this compact digital camera has its buffer size increased to 233 images for 24 fps continuous shooting. The camera records videos in UHD 4K at 30 fps as well as 40× slow-motion videos at 250 fps. With the integrated Zeiss vario-sonnar T* lens, you can take photos or videos from both wide and close-up perspective. The camera claims to have the world's fastest AF speed and largest AF coverage for shooting moving subjects. You can frame scenes using either the OLED electronic viewfinder or the 3.0-inch Xtra Fine LCD. The programmable custom buttons make it easy to access favorite functions easily. Also, the menus are redesigned to simplify navigation. The built-in Wi-Fi allows image transfer to linked smartphones along with a remote control.

The Sony DSC-RX100 VA has a built-in Zeiss Vario-Sonnar T* f/1.8–2.8 lens with a 35mm-equivalent focal range of 24–70mm. It uses an optical design of 10 elements in 9 groups. Nine lenses of these 10 elements are aspherical that reduce chromatic aberrations and maintain sharpness at the edges. Additionally, the Zeiss multi-layer T* coating minimizes ghosting and flare. A control ring is located at the front that allows you to adjust the shutter speed, aperture, and other functions of the camera. You can set the focal length at 24, 28, 35, 50, or 70mm using the control ring. With the integrated ND filter, the amount of light entering the camera can be lowered by 3 stops. The on-sensor phase-detection AF system includes 315 AF points that cover 65% of the imaging area to provide responsive autofocus in 0.05 seconds. For capturing images of fast-moving objects, the camera takes advantage of the anti-distortion shutter to get rid of skewing.

This Sony camera comes with a high-powered 20.1 MP Exmor RS BSI CMOS sensor that offers 5× increased data throughout. It also contributes to the AF performance and the overall speed of image capture and buffer shooting. The camera has a 3.0-in XGA OLED electronic viewfinder with a 2.36m-dot resolution. Similar to the lens, the EVF is also given a Zeiss T* coating to ensure clarity. You can compose scenes while video-shooting from high or low angles using the 3.0-inch Xtra Fine LCD. Its WhiteMagic technology adjusts image brightness according to the ambient lighting.

The Sony DSC-RX100 VA Cyber-shot camera captures 4K videos at a frame rate of 30 fps. For 1080p, the camera offers a maximum frame rate of 60 fps. The 40× super slow motion mode records 250 frames seconds per second to create stunning footage for B-rolls. As for still shooting, the camera provides a maximum resolution of 5472×3648 pixels for both JPEG and RAW images. The Bionz X image processor along with front-end LSI boosts the system performance to achieve a maximum buffer shooting speed of 24 fps. Also, this upgraded version of the DSC-RX100 allows continuous shooting for up to 233 JPEG images. The S-log 2 recording captures videos in a wide dynamic range to preserve all the color details for post-production. Moreover, the zebra function and display assist mode support the gamma recording by allowing accurate exposure adjustment.

The built-in Wi-Fi enables instant image transfer and remote control via smartphones. This camera from Sony also connects to non-NFC devices by generating a QR code. You can record audio in high quality as the camera captures sound in a 2-channel stereo Dolby Digital format. The custom buttons on the camera are used when accessing a favorite function. You can browse through the menu easily as it is redesigned to speed up the workflow. The camera is supplied with an NP-BX1 rechargeable Li-ion battery pack.