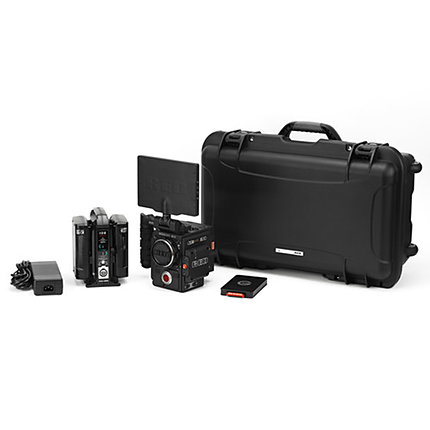 The Red Digital Cinema DSMC2 GEMINI Camera Kit consists of a RED DSMC2 Camera BRAIN, canon lens mount, touchscreen LCD, batteries, media, & an included protective case, which holds all of the kit's gear, making it secure during transport & storage. The only accessory you will need in order to begin your adventure is a Canon EF-Mount lens. The DSMC2 is part of Red's "2018 Unified DSMC2 Lineup", & is designed to combine high-performance RAW video recording, into a compact camera body, which can be built up in your own custom way. Its form factor is standard, making Red accessories, as well as other manufacturers' accessories, easily compatible with it.

The DSMC2 BRAIN features a GEMINI 5K Super 35 sensor, which boasts up to 16.5-stops of dynamic range, as well as 5K recording. Though the GEMINI sensor has fewer photosites than the HELIUM/MONSTRO sensors, it features advanced circuitry (designed for the aerospace indsutry), which allows you to switch native sensitivities. Its ability to operate in both normal, & dimly lit scenes, without excessive noise or blown highlights is remarkable. A RED DIGITAL CINEMA DSMC Canon Mount (Aluminum) is included, allowing you to attach separately available EF/EF-S lenses to your Camera BRAIN.

The format of choice for the DSMC2 is REDCODE RAW, by Red, & is designed to reduce data rates, while still maintaining high-quality image rendering. If a proxy workflow is your preferred choice, DNx and ProRes files can be recorded simultaneously to the DSMC2's MINI-MAG media. The ability to lower recording resolution provides the ability for the sensor to capture higher frame rates for slow-motion, dramatic footage. The DSMC2 features sensor windowing for recording slow motion in lower resolutions, but requires a wider/smaller format lens to compensate. Recording rates for the DSMC2 range from 12ps & up (ex: 24/25/30/48/50/60 fps & higher).

Apple ProRes & Avid DNx:
If your project requires proxy files, or faster turnaround times than RAW files can reach, ProRes and Avid DNx formats can be used for recording at 4K and 2K resolutions, directly to the MIN-MAG media. ProRes and Avid DNx files can be recorded along with the RAW files, eliminating the usual time needed for transcoding proxies. The debrayed files can be brought straight into your NLE to begin editing.

Camera Form Factor:
RED's DSMC2 camera line, like the preceding DSMC, is designed to be modular, making it suitable for a variety of production workflows. The DSMC2 features a smaller & more lightweight design than the original design, & when stripped down to the "BRAIN" itself, it serves as a high-resolution, gimbal compatible, workhorse. Professional I/O connectors & battery power are included for extended use. The DSMC2 is designed to enable the ability of switching out its lens mounts, which opens doors for many different types of lenses to be used. By exchanging the standard Optical Low-Pass Filter, you can create alternative versions of your images at the sensor level. A separately available electronic viewfinder, without cables, can be mounted to the DSMC2. Attach the included RED Touch 7.0" LCD to monitor your filming (see "RED Touch 7.0" LCD" below for more details).

RED Digital Cinema DSMC Canon Mount (Aluminum):
The RED Digital Cinema DSMC Canon Mount is an aluminum mount, which attaches to your DSMC or DSMC2 camera brain, in order to provide an EF/EF-S lens port for your camera. The lens mount is securely locked into place via dual locking rings, & features captive screws to avoid the fear of one dropping into the sensor cavity. The mount is designed to support electronic communication between the camera & lens, even though not all functions may be supported. RED DSMC mounts are designed to not require a backfocus adjustment in order to be swapped out. Its aluminum design creates a balance between strength & weight. Autofocus & electronic iris control is available for select Canon EF/EF-S lenses, as well as touch-focus.

Built-in auxiliary & USB outputs allow for the powering of your accessories, which helps to limit the number of power splitters & converter boxes, which hang from your camera. The Expander also features an analog stereo input, as well as a stereo headphone jack. The V-Lock I/O Expander is compatible with WEAPON 8K Super35, WEAPON 6K, EPIC/SCARLET-W, & the RAVEN. The Expander also is designed to communicate with your camera, & allows for electronic signals and video output. The Expander requires that your DSMC camera features firmware v6.2.17 or later installed. It simplifies your ouput & power situation for shooting, & can be removed for smaller profile shooting (ex: gimbal, stash-cam, drone shooting, etc.).

RED Digital Cinema Touch 7.0" LCD:
The featured touch 7.0" LCD features a resolution of 1920 x 1136, & is designed for 170° off-axis viewing (85 Degrees Up, Right, Left, or Down), giving you the ability to see an image without having to be directly aligned. The RED Touch 7.0" LCD mounts directly onto your DSMC2, & provides cable-free operation with your Camera BRAIN. Its ability to be mounted directly onto your camera allows  for a clear view, without the hassle of organizing cables. It features a built-in hinge for 180° of tilt, with the ability to tilt 90° forward, & 90° back. The LCD's ability to tilt allows it to fold flat onto your Camera BRAIN.

IDX  DUO-C98 96Wh High-Load Battery (With D-Tap Advanced, Standard D-Tap, & USB Port:
The IDX DUO-C98Wh High-Load Battery features a V-Mount & sports a small size, of 2.3" thick, yet contains 96Wh for powering your devices. The battery is well suited for aerial & handheld gimbal applications, as well as productions where weight can be an issue. The battery's data is available for viewing in most camera's viewfinders.

The DUO-C98 is able to handle a combined load of up to 10A via its V-mount, D-Tap outputs (50W each), & USB port. One D-Tap is also able to charge the battery via a separately available charger. The DUO-C98 also features battery circuit protection to avoid overcharge, over-discharge, exposure to high temperatures, or over-current, to protect your battery during production. An LED battery-life indicator is included on the side of the battery to provide a quick view of the charge status. The DUO-C98 is also compatible with all IDX Endura V-mount chargers.

IDX System Technology VL-2X 2-Channel V-Mount Charger/Power Supply:
The VL-2X 2 Channel V-Mount Charger/Power Supply is designed to provide charging abilities for lithium-ion & NiCad batteries, allowing you to automatically switch to the second battery, after fully charging the first. The V-Mount Charger provides up to 2.7A of quick-charge current, without the noise of a typical charger, due to its fanless design. A 4-pin XLR power output is also featured, which offers up to 36W of DC power, when the charger is connected to a wall outlet, & your batteries are removed. The DC output is disabled while a battery is charging. The VL-2X is designed with reliable internal safety features that protect the battery & charger from being damaged, & will automatically stop charging if an attached battery reaches an overvolatage point.

G-Technology ev Series Reader RED MINI-MAG Edition:
The G-Technology ev card reader is designed to accept RED's MINI-MAG SSDs, & can connect them to a computer via USB 3.0 or SATA connection.

RED DIGITAL CINEMA RED MINI-MAG:
With a capacity of 960GB, the RED MINI-MAG is compatible with most RED cameras, & while using with select cameras, can reach write speeds as high as 300 MB/s. The RED MINI-MAG can simultaneously support R3D & Apple ProRes recording when used with DSMC2 camera systems.

RED DIGITAL CINEMA DSMC2 Outrigger Handle:
The DSMC2 Outrigger Handle is designed to mount to your DSMC2 Top Handle Port, allowing you to have a support handle when gripping the camera with one hand. This allows you to have your other hand free for lens adjustments. The Outrigger Handle features an integrated start/stop button, featured in its molded grip. The handle allows for a cable-free connection, & is attached via two cap head Allen head screws. It incorporates fourteen 1/4"-20 threaded accessory mounting holes across the top.