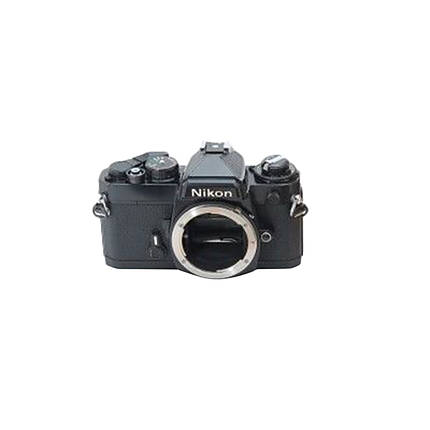 The Nikon FE SLR Camera is the right choice for professional and intermediate-level photographers who prefer analog film photography. This camera comes with a 50mm F/1.8 Series E lens. It can also work with other Nikon F mount lenses. The camera works on a center-weighted TTL exposure metering powered by two SPD cells. You can adjust the ISO range from ASA 12 to 4000. The shutter speed can be set to a maximum limit of 1/1000th of a second for taking shots of fast-moving objects. The fixed eye-level viewfinder indicates the shutter speed, aperture, flash status of the camera along with the manual metering range and exposure compensation limit. An external flash device can be mounted to the hot shoe contact. The camera comes with other notable functions like self-timer, DOF preview button, memory lock, and multi-exposure.

The camera has a 50mm F/1.8 Series E lens provided with it. Its optical design includes 6 elements arranged in 5 groups. These elements are coated to improve clarity and contrast. The lens can manually focus on an object as close as 0.6 m. With the 7-blade diaphragm, the lens provides a smooth bokeh. You can attach a 52mm filter to the front metal thread. The aperture-priority AE mode determines the appropriate exposure setting by varying the shutter speed while keeping the aperture locked in its position. You can use this camera in varied light conditions with its ISO range of ASA 12 to 4000. The maximum shutter speed of 1/1000th of a second lets the camera capture clear shots a fast-paced object. The Nikon FE SLR has a matte Fresnel focusing screen with a central split-image rangefinder spot and a microprism ring for assisting in the focus operation.

The fixed eye-level pentaprism viewfinder has a built-in TTL exposure meter. You can adjust the exposure by referencing the needle in the viewfinder. The exposure compensation markers are also provided to avoid the image getting over or underexposed.

The camera uses the 35mm film negative to take pictures. You have to turn the single-stroke advance lever, which offers 135° throw angle and a 30° stand-off angle, for winding the film. The advance lever can also be used as an on-off switch. This camera has a self-additive frame counter that automatically resets to the "S" value when you open the camera back. You can attach the optional MD-11 motor drive for automatic film winding.

The camera has an ISO-type hot shoe that accepts electronic flash units. After mounting the flash, it can be synchronized with the camera shutter from 8 seconds to 1/125th of a second. You can sync the flashbulb to 1/30th of a second. The Nikon EF SLR camera comes with a self-timer that allows you to delay the shutter release up to 14 seconds. A memo holder is provided at the rear, which can be used to keep the current film information as a reminder. The cameras metering functions on two 1.5V silver-oxide batteries.