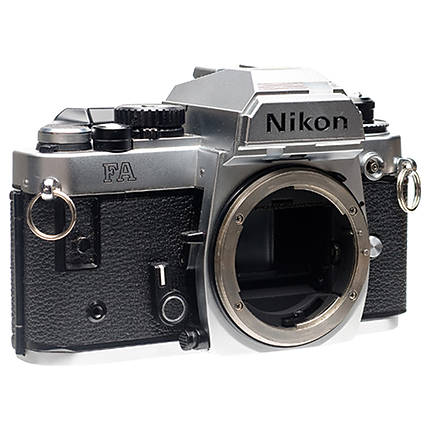 Lens Mount:
Nikon F mount AIS(some lenses have limitations, and "G"-type lenses cannot be used with this camera). Older Non-AI Nikon F-Mount lenses can NOT be used unless modified to AI

Sporting a design that was revolutionary at the time of its introduction, the Nikon FA 35mm Film camera was the brand's first film camera to offer both shutter- and aperture-priority exposures modes. This Nikon F AIS mount camera comes with an automatic matrix metering that offers a working range of EV 1 to 20 at ISO 100 with an f/1.4 lens aperture. The shutter of the camera can function at a speed range of 8 seconds to 1/4000th of a second. It can also synchronize with the flash bulb at 1/250th of a second via the PC terminal of the camera. The Nikon FA lets you click two images in a single frame to produce a multi-exposure effect. The mirror lock-up function, which is to be used when the self-timer is enabled, prevents image blurring caused by any change in exposure.

The Nikon FA SLR was the first film camera in the brand’s collection to include both shutter- and aperture-priority exposures as well as the program AE mode. Its automatic matrix metering has an ISO range of 12–4000. The camera works with a metering range of EV 1 to 20 at ISO 100 when paired with an f/1.4 aperture lens. You may increase the shutter speed to 1/4000th of a second to capture clear shots of moving objects. The camera offers a manual focus with its standard matte screen, having a split-image RF and micro-prism ring. Moreover, you may replace the focus screen with another suitable alternative.

The Nikon FA film camera comes with a fixed eye-level pentaprism viewfinder that offers a 0.8× magnification and 93° screen coverage. The eyepiece diopter is set to the standard -1. In the viewfinder, you can also check the shutter speed, flash-ready status, manual-metering scale, and exposure-compensation markers.

The film roll of this Nikon camera can be wounded in a single stroke with a 135° winding angle and a 30° stand-off. Moreover, the winding is done twice as fast when the shutter-release button is locked. You may also attach the MD-15 motordrive for shooting continuous frames at 3.2 fps. The camera allows you to capture two images in a single frame to produce a multi-exposure effect.

With the integrated PC terminal of the Nikon FA film camera, you may use flash bulbs to facilitate night photography. The mounted flash can synchronize with the shutter at 1/250th of a second. Also, you may mount a TTL flash on the accessory shoe provided at the top. The DOF preview button allows you to view the depth of field in the frame before taking the final shot. Delay the shutter release between 8 and 14 seconds when using the self-timer function. The camera's exposure modes are powered by two PX76 silver-oxide batteries or a single 3V DL13/N lithium battery.