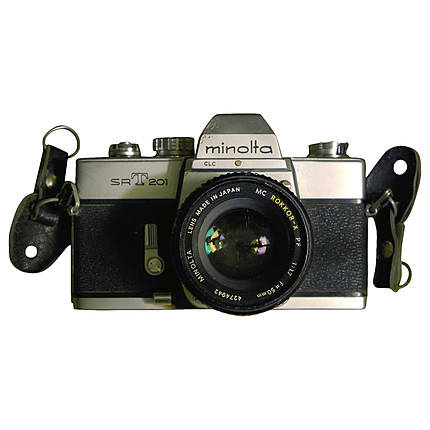 The Minolta SRT 201 Film SLR Camera produces high-quality photographs when working in concert with its 50mm f/1.7 Rokkor-X lens. The camera can also be used with other Minolta MD lenses. It has a TTL (Through the Lens) CLC (Contrast Light Compensator) meter that is coupled with a shutter and film speed. The fully mechanical focal-plane shutter of the camera operates at a maximum speed of 1/1000th of a second. This camera has a Mat Fresnel field-focusing screen with split-image spot circled by a microprism band. Additional features in the camera include a self-timer, mirror lockup, and depth-of-field preview button.

The Minolta 50mm f/1.7 Rokkor-X lens is provided with the camera. The lens is made with six elements in five groups and has a manual focusing system with which it can capture crystal clear images of subjects that are as close as 0.45 m. The Minolta SRT 201 has CLC metering that adjusts high exposure by bringing down the extra brightness in the scene. It also has two CdS cells on the pentaprism, which ensure a working range of EV3 to EV17 at ASA 100. This film camera has a maximum ISO of 6400. As for the shutter, its speed can be increased to 1/1000th of a second.

This Minolta film camera has a fixed eye-level pentaprism viewfinder that lets you get a bright view of the scene at hand. It has a Mat Fresnel field-focusing screen with a split-image spot that is circled by a microprism band. Along with the scene, you may view relevant information in the viewfinder such as current exposure, shutter speed, and battery status. A large return-type mirror ensures there are no image cutoffs and that the exposure readings are accurate.

The Minolta SRT 201 SLR camera captures images with the help of a 35mm film. A quick advance winding lever offers 20° clearance and 150° winding angles. The resetting counter shows the number of exposed frames. And, with the rapid rewind crank, the next frame can be quickly prepared for the shot. This camera has shutter locks and a double-exposure-blocking function.

The Minolta SRT 201 Film SLR Camera comes with X-sync and can be used with an external flash. The camera synchronizes the flash with the shutter at 1/60th of a second. The self-timer function can be activated to delay the shutter release by up to 10 seconds. With the mirror lockup mechanism, the camera reduces blurring caused by vibrations during exposure metering. This feature is essential for photomicrography as well as while taking close-ups. The camera’s exposure meter is powered by a 1.35V mercury button battery. You may find out whether the battery is functional or not with the help of the battery-check button.