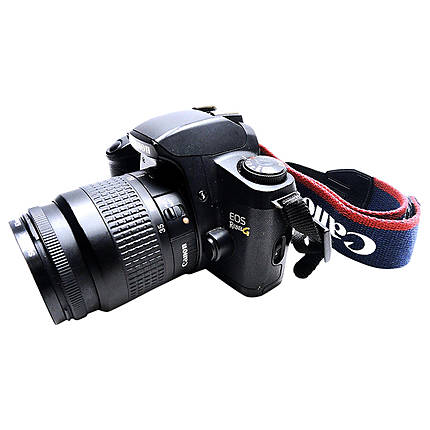 THIS IS A USED ITEM
IMAGES ARE FOR ILLUSTRATIVE PURPOSES ONLY
Condition: Excellent

The Canon Rebel G SLR simplifies the photo capture process in film photography by including an autofocus system and different picture taking modes. This camera has a Canon EF 35–80mm F/4–F/5.6 lens provided with it. The camera comes with a total of 8 exposure modes, of these 6 are automatic, one is intended for flash photography, and the last one is manual. You get a 90% frame coverage with the viewfinder. This camera has an ISO film range of 6 to 6400 and maximum shutter speed of 1/2000th of a second. Thanks to the automatic winding, the camera takes continuous shots at 1 fps. The built-in flash is useful when shooting in dark conditions. You can also mount an external flash to the hot shoe. The camera's electronic functions run on two DL123A or CR123A lithium batteries.

The Canon EF 35–80mm F/4–F/5.6 lens has 8 glass elements arranged in 8 groups. This camera can also fit other Canon EF-mount lenses. The lens has a minimum focus distance of 0.4 m and 0.23× image magnification. You can attach a 52mm circular filter to the front thread. The camera has up to 6 auto-exposure modes namely, Program AE, Apture-priority AE, Automatic depth-of-field AE and Full Auto. One AE mode is optimized to work with Speedlite flash units such as 220EX and 380EX. The shutter speed display gives the camera shake warning. This camera uses the TTL-CT-SIR with multiple Base-stored Image Sensors for the focusing operations. You can take pictures of moving objects by increasing the shutter speed up to 1/2000th of a second.

The camera lets you compose the shot with its optical viewfinder. In the viewfinder, you can see the partial metering circle and three focus points at the center. It offers a 90% screen coverage and 0.7× magnification. Camera-related information such as AE lock, shutter speed, aperture, high-speed flash, and exposure is shown at the bottom of the viewfinder screen. Moreover, the camera has an LCD panel that displays the similar information with the addition of battery status, film status, frame counter, and 4 functional pointers.

This camera takes photos on a 35mm film to produce a photograph of 24mm×36mm. The camera can also work with DX-coded films within a speed range of 25 to 5000. You can overlay up to 9 images on a single frame to create a unique multi-exposure effect. The camera has an automatic film wind function that enables you to take continuous shots at 1 fps. This camera automatically rewinds the film when it reaches the end of the roll. You can also rewind the roll from midway.

The camera has a built-in flash with a guide number of 12 m at ISO 100. It provides coverage of a 28mm lens and fires the next flash in 28 seconds. You can attach an external Speedlite flash to the top hot shoe. The mounted flash can be synchronized at all shutter speeds within the range of 30 seconds to 1/2000th of a second. With the self-timer, the shutter release can be delayed up to 10 seconds. Two DL123A or CR123A lithium batteries need to be used for operating the camera.