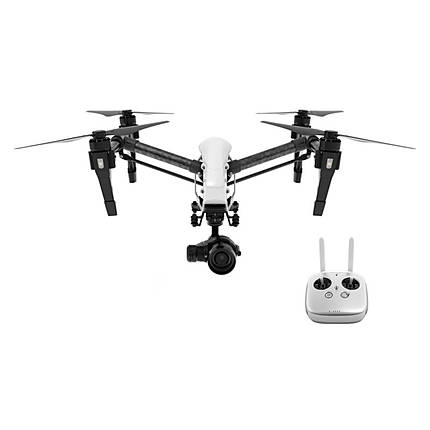 Redefine the concept of aerial photography and videography, with the DJI Inspire 1 Pro Bundle w/ Zenmuse X5, 15 mm f/1.7, TB-48 x5. It features an inbuilt optical flow sensor, which makes it easy to fly the quadcopter indoors. The quadcopter’s integrated 4K camera is equipped with a 16 MP Micro Four Thirds CMOS sensor that enables you to capture astounding 4K footage and stills. The 3-axis gimbal, which holds the Zenmuse X5 camera, features brushless servo motors that keep your shots stable at the horizon level. The aerodynamic airframe design of the quadcopter not only gives it a stylish look, but also reduces resistance, which means less energy consumption and better performance.

The quadcopter’s Zenmuse X5 camera is equipped with a 15 mm f/1.7 lens that is constructed with nine elements in seven groups, along with three aspherical elements. Delivering a beautiful bokeh effect on your subject’s background is the seven-blade circular diaphragm. The field of view of the lens stands at 72°, and the focus distance at 0.7 ft. You can adjust the ISO speed between 100 and 25,600, and the shutter speed between 8 seconds and 1/8,000th of a second.

The Zenmuse X5 captures DNG RAW and JPEG pictures at its highest resolution of 4608x3456 pixels, as well as DCI 4K footage at a 4096x2160-pixel resolution at 25p. You can take single burst shots of three, five, and seven frames, and perform time-lapse photography at intervals of 3, 5, 7, 10, 20, 30, and 60 seconds. The camera also has the option for Auto Exposure Bracketing of 3/5 bracketed frames at an EV bias of 0.7 for shooting high-contrast scenes.

The Inspire 1 Pro quadcopter from DJI includes a 3-axis gimbal for connecting the Zenmuse X5 camera. The gimbal is equipped with brushless servo motors that ensure stable shots are taken, even at the horizon level. The quadcopter’s aerodynamic airframe design not only looks stylish, but also minimizes resistance, thereby ensuring less energy consumption and superior performance. Its carbon fiber arms have an impressive strength-to-weight ratio, and retract once on land to provide the camera with an unobstructed 360° view. Use the built-in optical flow sensor for flying the quadcopter indoors without much effort. Moreover, this technology uses sonic waves that perform stability functions similar to those of GPS, whereby, when there is no GPS, the quadcopter can hold its location and fly as piloted. You can control the quadcopter’s camera as well as flight remotely via a tablet or smartphone through the proprietary Inspire 1 Mobile app. The included transmitter operates on a frequency of 2.4 GHz, has dedicated buttons for video and photo capture as well as a gimbal-control dial, and runs on an integrated 6000 mAh rechargeable battery. For better control, you can use two transmitters with the assistance of another person; while one controls the quadcopter, the other operates the camera. The live map and radar make it possible to keep track of the quadcopter’s location. Powering this quadcopter is a 4500 mAh TB47 Lithium Polymer battery.