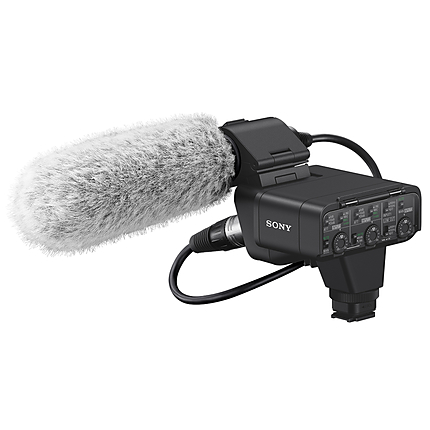 The Sony XLR-K3M Digital XLR Adaptor Kit with Microphone features a dual-channel, digital XLR audio adapter, which allows you to connect microphones, as well as other audio sources, to cameras that are equipped with a Multi-Interface Shoe. Also featured, is Sony's ECM-B1M Digital Shotgun Microphone, which is a camera-mount, digital shotgun microphone, which was released with the Sony Alpha a7R IV for compatibility purposes. The ECM-B1M Digital Shotgun Microphone is specially designed for video creators, working with Sony cameras that are equipped with the Multi-Interface Shoe. When used with the Sony Alpha a7R IV, the ECM-B1M Digital Shotgun Microphone is able to produce its highest-quality audio, by producing a digital audio stream, directly into the camera. Analog recording is available with other sony cameras that contain the standard Multi-Interface Shoe, due to the ECM-B1M's selectable digital/analog output.

The XLR-K3M features 2x XLR-1/4" combo mic/line inputs that run on phantom power, as well as a 3.5mm stereo input with plug-in power. Both of these features have individual level controls to make the adapter easy to use, right when you open the box.

The included ECM-B1M Digital Shotgun Microphone features eight high-performance microphone capsules, as well as advanced digital signal processing. The ECM-B1M features three selectable directivity patterns, providing you with a wide range of recording and filming situations. It also features a "plug-and-play" operation, which allows you to use the microphone right out of the box. You can begin recording, with ease, and immediately begin recording Facebook Live streams, YouTube Videos, studio interviews, & more.