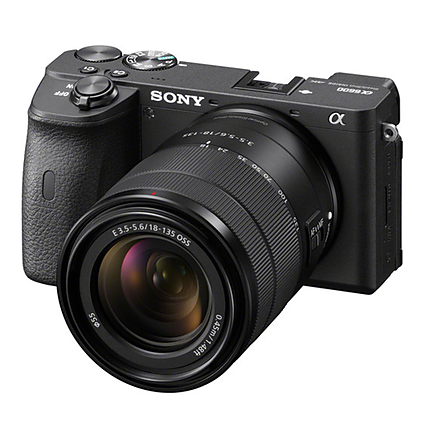 Picture Format:
The types of files that a particular camera produces. All cameras output JPEG images, but some of the more sophisticated models will shoot in RAW mode. RAW Image Formats will vary based on manufacturer.

The Sony Alpha a6600 Mirrorless Digital Camera with 18-135mm Lens is an APS-C-format mirrorless camera that is suitable for both image & video applications.

Optics & Focus:
The Alpha a6600 comes with a Sony E-mount 18-135mm, APS-C-format lens, with a 27-202.5mm equivalent zoom, & f/3.5-5.6 maximum aperture range. This wide-angle lens is complimented by its Optical SteadyShot I.S. (image stabilization) system, which is designed to minimize the appearance of camera shake, to provide sharper imagery during handheld shooting. Its 5-Axis I.S. compensates for five different types of camera shake that you may encounter during handheld shooting, for both image & video applications. A linear AF motor is featured to provide fast & accurate focusing performance, which is also quiet for video recording. Its optical design features both extra-low dispersion glass, & aspherical elements, to improve sharpness & clarity throughout the zoom range.

The Alpha a6600 features a powerful 4D Focus System, which covers nearly the entire sensor area, & incorporates 425 on-chip phase detection points, as well as 425 contrast-detection areas to allow for precise focusing, in as fast as 0.02 seconds. Its hybrid AF system enables high-density Tracking AF technology, which is able to track moving subjects in a variety of lighting conditions.

The Alpha a6600 also features a 3.0" (921.6k-dot) LCD touchscreen, which can be tilted 180º upward or 74º downward, to accommodate working from higher & lower angles. The monitor also features "White Magic" technology, with RGBW pixel structure to provide increased brightness for shooting in daylight conditions. The monitor's touchscreen design enables Touch Focus control, which allows for immediate focus point selection via the screen while looking through the viewfinder.

Image & Video:
The Alpha a6600 features a powerful 4D Focus System, which covers nearly the entire sensor area, & incorporates 425 on-chip phase detection points, as well as 425 contrast-detection areas to allow for precise focusing, in as fast as 0.02 seconds. Its hybrid AF system enables high-density Tracking AF technology, which is able to track moving subjects in a variety of lighting conditions. Its real-time Eye AF is capable of focusing on your subject's eyes, whether it is human or animal, & is available in AF-S & AF-C modes. Its Lock-on AF maintains focus on moving subjects, & the camera also features a Peaking Manual Focus function to assist with manual focus control for acquiring sharp focus.

For high-resolution recording, the a6600 features internal recording of UHD 4K movies, in multiple frame rates up to 30 fps. Full HD 1080p recording is also supported in frame rates up to 120 fps, & utilizes the 100Mbps XAVC S format, contained within an MP4 wrapper, with 4:2:0 sampling. The 120 fps recording enables 4x & 5x slow motion movie recording, with the frame rate set to either 24p or 30p. An uncompressed HDMI output enables the ability to use an optional external recorder for clean 4K recording, with 4:2:2 sampling. 4K video recording also provides the ability to produce 8 megapixel stills during playback, through grabbing a frame from your movie, & storing it as a separate file.

The Alpha a6600 allows you to use the same S-Log2 Gamma Curve, found on high-end Sony Cinema cameras, which provides up to 1300% more dynamic range into your video signal, for increased post-production capabilities. HLG (Hybrid Log-Gamma) support is available for recording within a wide color gamut, & S-Log3 is also available for producing a 14-stop dynamic range, with increased grading control in the shadow-mid-tone areas of the image.

The Slow & Quick motion function provides a variety of new frame rates, allowing you to capture Full HD video between 1-120 fps, & enable the ability to slow down, or speed up the action. An enhanced Zebra function is also featured to aid in monitoring your exposure values in high-contrast scenes.