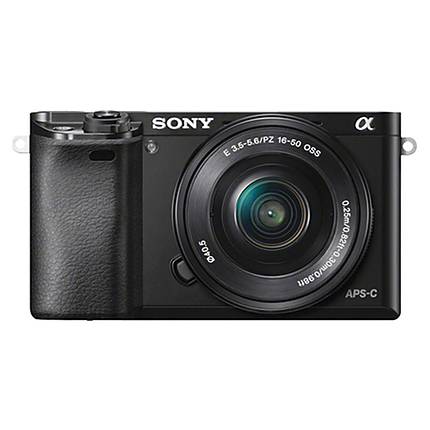 Because of its ability to operate at a great focal length with a Sony-E lens mount and a 4x digital zoom, the Sony Alpha A6000 Mirrorless Digital Camera Body ILCE6000/B provides users with multiple shooting options. Along with playing around with focal lengths and aperture ranges, users also get access to the supremely efficient 24.3 MP APS-C HD 23.5 x 15.6 mm Exmor CMOS sensor and BIONZ X image processor. All in all, the Sony Alpha A6000 Mirrorless Digital Camera Body gets any camera aficionado's job done perfectly.

As stated earlier, this camera is fitted with a 4x digital zoom and is also compatible with a Sony-E lens mount. In other words, the camera performs admirably well at a supreme focal length. One also gets to operate at a splendid aperture range. The ISO range of 100-25,600 always remains constant. Plus, users are also treated to an in-built flash.

Another very impressive factor of the Alpha A6000 is its 24.3 MP -C HD 23.5 x 15.6 mm Exmor CMOS sensor. This CMOS sensor works wonders as far as the sharpness and color recreation of the images are concerned. No matter what the conditions on an outdoor shoot may be, the sensor never fails in maintaining the picture quality. The 3.0-inch widescreen tilting LCD display screen also plays its part in assisting the sensor while capturing these sharp and clear images. What works in the LCD screen's favor is its TFT coating and 921,600 pixel ratio.

The CMOS sensor might be one of the most vital aspects of this camera when it comes to maintaining image quality. However, there's another very important facet of this camera that also has a major impact on its final results. This device is Sony's very own BIONZ X image processor. The image processor works in tandem with the sensor and ensures that the quality of photographs never waver. All videos are shot in full 1080p HD quality and that too at high rates of 24 to 60 fps. Assisting users in shooting videos are the A6000's subject tracking facility and its high-speed hybrid auto-focus function.

Some other important factors of the Sony Alpha A6000 Mirrorless Digital Camera Body ILCE6000/B also deserve a mention. Prime among these include its color matrix metering for precise exposures and multi-shoe interface for supporting a wide range of Sony's digital accessories such as microphones, flash units, monitors, and lights.