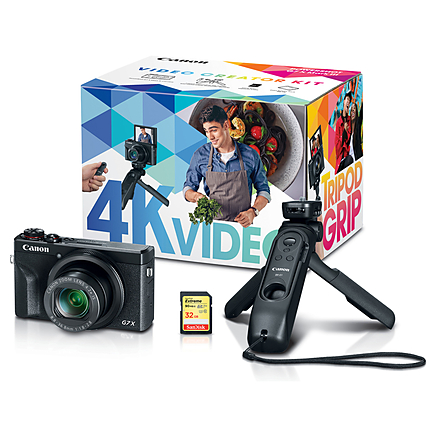 The Canon PowerShot G7 X Mark III (Black) is designed for upgrading your vlogging or picture taking skills from a smartphone, to a higher quality level. The G7 X Mark III features a compact design, & has live streaming capabilities, which allows you to stream directly to YouTube. Its 20.1 Megapixel 1.0" stacked CMOS sensor, combined with its powerful DIGIC 8 image processor, produces high-quality, crisp images. The G7 X Mark III also provides sharp videos with minimal distortion of sound. Its 4.2x optical zoom, as well as its lens aperture of f/1.8 (wide) to f/2.8 (tele) allows you to shoot 4K video to create stunning videos. The G7 X Mark III is great for capturing videos and still images to share with your family, friends, and social media followers.

The PowerShot G7 X Mark III features a 3.0" touch panel LCD screen, with a tilt option of 180 degrees for selfies. Its vertical video support allows you to get creative with your filming and image shooting. The G7 X Mark III can be powered via USB charge, or with a NB-13L battery pack (included). Its built-in WiFi and Bluetooth capabilities make transferring files to a compatible smart device, via the free Canon Camera Connect app, quick and easy. The WiFi also allows you to share and upload directly to social media, or print directly to a compatible wireless Canon Printer. The built-in Bluetooth allows you to connect the camera to compatible devices, which helps to preserve battery life, & provides remote control of the G7 X Mark III from another compatible device. GPS data from your phone provides your location, which allows you to geotag your images to see where you took your photo.

The Canon Tripod Grip (HG-100TBR) is extremely useful for stabilizing your shots, & is fully compatible with the Canon PowerShot G7 X Mark III, as well as other select EOS M & PowerShot G cameras. The Canon Tripod Grip is meant to serve as a tabletop tripod, or can be used as a camera grip, for handheld shooting. The tripod grip's head features a tilting design, for working at different angles, & attaches to your camera via a 1/4"-20 mount. Also included, is a BR-E1 Wireless Remote Control, which fits into the grip's design, & can be used for wireless shooting & camera control.

The SanDisk 32GB Extreme UHS-I SDHC Memory Card supports 4K video-recording, & is fully compatible with the Canon PowerShot G7 X Mark III. The SanDisk 32 GB Extreme Memory Card is a UHS-I card, & provides maximum write & read speeds of up to MB/s, & 40 MB/s to support burst shooting. Apart from 4K recording, the card can store 1080p & 3D videos, while still maintaining a smooth performance. The Advanced Error Correction Code engine, minimizes the chances of errors, when recording videos, or transferring them to other systems. This memory card is waterproof, shockproof, & X-ray proof, & can operate in an extreme temperatures, ranging from -13° to 185°F. It is also compatible with SanDisk's "RescuePRO" software, to recover accidentally-deleted, or corrupt files.