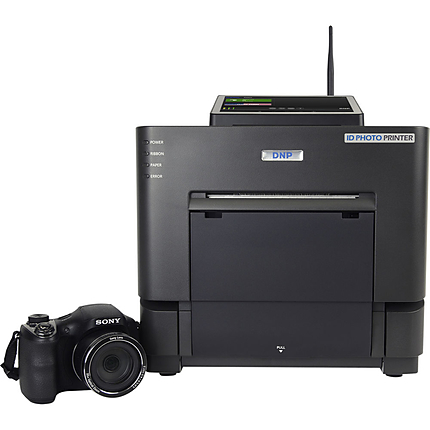 Set-up your photo studio with the DNP IDW500 Passport & ID Photo Solution. This set primarily includes an ID Photo Printer and a Cyber-shot DSC-H300 digital camera. Firstly, the printer uses dye-sublimation technology to produce two 2×2-inch images on a 4×6-inch paper. With the Sony Cyber-shot DSC-H300, you can take quick portrait shots that can be transferred to the printer via the included FlashAir card and IDW500 8-inch wireless console. The camera features a 20.1 MP super HAD CCD sensor and a 35× optical zoom lens with Optical SteadyShot image stabilization. The face detection and panorama mode add variety to your photo capture experience.

As for the camera, it has an optical zoom lens with a variable focal range of 4.5–157.5mm and an aperture range of f/3.0–5.9. The lens can focus on the subject's face by using the incorporated face detection. You may also focus on an object as close as 0.04 inches. The camera offers an ISO range of 80 to 3200 and a maximum shutter speed of 1/1500th of a second. You may use the different exposure options such as movie, intelligent auto, or sweep panorama when taking still shots. The Optical SteadyShot image stabilization reduces the camera shakes to ensure clarity.

The camera comes equipped with a 20.1 MP super HAD CCD image sensor that ensures high-color sensitivity to produce vivid picture quality. As for the printer, its biometric function automatically sets the head size and position according to sizing guide. On the wireless console, a 7-inch 5-point capacitive touchscreen is located, which has a resolution of 1280×800. A 3.0-inch Clear Photo LCD is provided at the rear of the camera, which gives a live view of the scene in 461k-dot resolution.

The camera provides 5152×3864 dpi resolution JPEG images in two selectable aspect ratios, the standard 4:3 and the wide 16:9. As you press the movie button, the camera switches from image capture to 720p video recording at 30 fps. The continuous shoot mode captures up to 100 frames at 8 fps. Various shooting modes like the beach, night scene, snow, and toy camera, let you add a creative touch to the captured photographs. The printer uses CMYK ink palette to print 2×2-inch color images on a 4×6-inch paper. You may manually adjust the image sharpness or let the printer handle brightness and contrast adjustment work in the auto mode.

The provided Toshiba FlashAir SD card, which has a built-in wireless LAN chip plus an antenna, lets you transfer images wirelessly to your PC or smartphone. You may also print images via the included IDW500 8-inch wireless console. In the printer, you can create a gallery of six images, which you have printed previously. The camera has a built-in flash that has a maximum range of up to 13.7 m on a wide lens setting. With the self-timer, the camera can be triggered at a particular time between 2 to 10 seconds. The camera has an integrated microphone to record audio in movie mode.