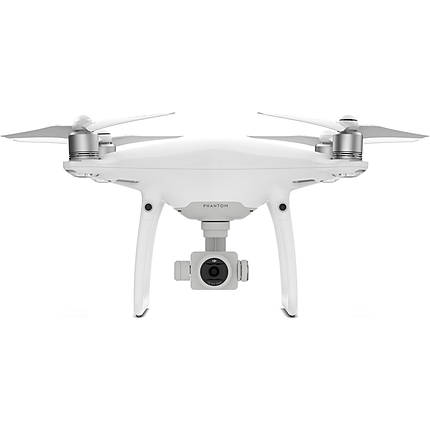 The DJI Phantom 4 Pro Quadcopter redefines aerial photography and cinematography. Its inbuilt camera has a 1-inch, 20 MP CMOS sensor for capturing crystal clear images, recording 4K videos at 60 fps, and burst-shooting at 14 fps. Highlights of this quadcopter’s features include TapFly, Draw mode, and Gesture mode. Its remote control has the new dual-signal Lightbridge HD video-transmission system that facilitates unobstructed transmission over 4.3 mi. You may switch from 2.4 GHz to 5.8 GHz control frequencies to cut through interference.

The camera of the Phantom 4 Pro features a 1-inch, 20 MP CMOS sensor for shooting photos of high quality, 4K videos at 60 fps, and burst-mode images at 14 fps. Although this quadcopter does not have an inbuilt touchscreen, its remote control has a provision to mount a smartphone or tablet for piloting through the proprietary DJI GO app. The quadcopter comes with a Draw feature, which lets you draw a route on your screen that the quadcopter follows. While in this mode, the quadcopter keeps its altitude locked, which helps while capturing complex shots, so you only need to focus on camera control. The TapFly feature lets you direct the quadcopter with just a single tap. The three modes under this feature are TapFly Forward, which enables flying in the selected direction; TapFly Backward, for flying in the opposite direction of the tap; and TapFly Free, which facilitates turning while flying. However, the TapFly Free does not come with the obstacle-avoidance system.

The camera of the Phantom 4 Pro shoots 4K videos at 60 fps in the MP4 or MOV format, and JPEG and DNG RAW images at 5472×3078-pixel resolution. In the burst mode, this camera enables you to shoot stills at 14 fps.

An advanced feature in the DJI Phantom 4 Pro is the FlightAutonomy system, which comprises infrared sensing systems and dual rear-vision sensors that make up four-direction obstacle-avoidance and five-direction obstacle-sensing systems. These save the quadcopter from obstacles on the flight route. Under the ActiveTrack feature, the camera can take shots of moving people and objects. The advanced image-recognition algorithms at play here allow the quadcopter to adjust flight dynamics to generate smooth shots. With the Phantom 4 Pro, you can take selfies without the remote control, thanks to the Gesture feature. An advanced computer-vision technology makes the quadcopter study the gestures of the subject, and once the scene is ready, an image is shot after a three-second countdown. With the Return to Home feature, the quadcopter can select the best route to return home, subject to environmental conditions. This quadcopter is durable and lightweight, as it is built from a combination of magnesium alloy and titanium alloy. It can take a 30-minute flight on one single charge of its 5,870 mAh 4S Lithium Polymer Intelligent battery.