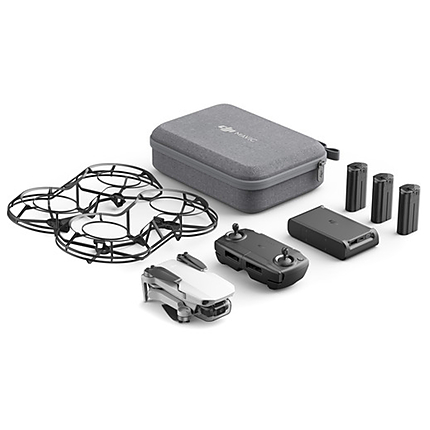 The DJI Mavic Mini Fly More Combo features DJI's latest drone, which is made to feature both, professional-quality content, & a physically compact design. The Mavic Mini's size, enables it to fly in areas where larger drones are not legally permitted, or areas that would normally require a drone license. The drone is combined with a stabilized, 3-axis gimbal, & sophisticated flight modes, which are able to produce 12MP images, & 2.7K Quad HD videos. Through the use of the DJI Fly app, the Mavic Mini can also capture complex, cinematic shots, with ease. The Mavic Mini features a downward vision system & GPS, which allows it to hover, precisely, in place, during both indoor & outdoor applications. The "Fly More Combo" includes extra components for enthusiasts, or professionals, & provides extra gear, for longer shoots. The extra gear, featured, includes: two additional batteries, two extra pairs of propellers, a micro-USB cable, spare screws, a 360º propeller guard, an 18W USB Charger, a two-way charging hub, & a carrying bag.

Due to the DJI Mavic Mini's size, it is able to stay in the air for up to 30 minutes, with a fully charged battery, which provides it with an even longer, maximum flight time, than previous models. The DJI Mavic Mini includes a drone controller, which is designed to work with iOS & Android smartphones. The use of a compatible smartphone, lets you to fly the drone, while keeping a low-latency, HD video-feed, from the gimbal, from up to 2.5 miles away. The controller also features removable flight sticks, that can be stored inside of it, making it more compact for storage.

A flight tutorial is included in the DJI Fly app, which makes the Mavic Mini an option for both beginners, & professionals.

The DJI Fly app includes a variety of creator templates, to assist in creating cinematic shots. With a simple tap, on the screen of your compatible device, you can capture a cinematic shot. The app also includes "QuickShot" modes, like; Circle, Dronie, Helix, & Rocket, to execute a programmed set of moves, during video recording. The captured videos can be shared, instantly, to social media, or with friends. "CineSmooth" mode is included to slow the Mavic Mini's speed & movements, for greater stability.

SkyPixel is a social media platform, that you can acess via the DJI Fly app, to share your images & videos with others, view the work of others, & learn about fun spots to shoot, near you.