I have spent the better part of the last 5 years shooting the majority of my photographs on film. To me, there is a different look and feel that film photos give versus their digital counterpart. It may be an imaginary belief but to me, there is a bit more soul in a film photo. That being said, I have shot pretty much every single color film there is on the market to date and it all leads me to saying that unequivocally Kodak Portra 400 is the best 35mm color film on the market.

Not really a controversial statement as Portra 400 has long been considered the go to film stock for fashion photographers to landscape photographers. The film’s ability to render skin tones as evenly as it does beautiful scenic photographs is what makes it so easy to use. Because Portra is 400 speed it gives you a lot of latitude to both under and overexposure your images. I’ve shot Portra 400 in extreme low light and also bright days and I can still get a very workable image. There’s a reason Portra 400 has long been considered the pallbearer for color negative film.

Popularity aside, I like to shoot with Portra 400 because it gives me a ton of options. Because of its massive exposure latitude it gives me the ability to get the picture I want, no matter what the light is like. Additionally, Portra 400 has an extremely fine grain structure that is barely noticeable when shooting box speed. Personally I like a bit of grain in my images but if I’m in a situation where less is more, Portra 400 is my choice.

At the end of the day, film, like the camera you choose to shoot with is a personal choice. To me, shooting Portra 400 just makes sense a lot of time. It’s the do everything film stock in my camera bag that I know when I grab it I’m going to like the way the photos look. You really can’t go wrong when it comes to shooting Portra 400 so go pick up a roll and take some film photos. 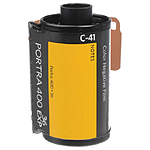