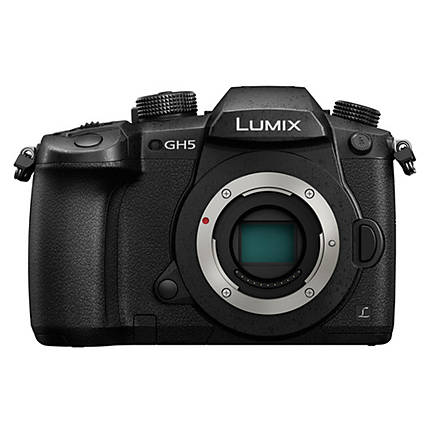 Intuitive to use and loaded with features, the Panasonic Lumix GH5 Mirrorless Micro 4/3 Digital Camera Body Only - Black is equipped with a 20.3 MP Digital Live MOS sensor that works along with the Venus Engine processor to produce high-quality imagery every time. Use the 225-area Advanced Depth-From-Defocus AF system for calculating the distance from subjects and adjusting the focusing position within 0.05 seconds. The 5-GHz WiFi connectivity, as well as the NFC and Bluetooth 4.2 Low Energy technologies, helps you to transfer your captured content to a wide range of similarly compatible devices.

The Lumix GH5 from Panasonic is compatible with many Micro Four Thirds lenses that have amazing focal lengths and apertures to suit your shooting requirements. The 225-area Advanced Depth-From-Defocus AF system automatically calculates the distance from subjects, and accordingly adjusts the focusing position in a short time of 0.05 seconds. The ISO ranges between 100 and 25,600, while the shutter speed stands at 1/16,000th of a second. The five-axis sensor-shift image stabilization, in conjunction with the Dual I.S. 2, reduces camera shakes by up to five shutter speed stops. However, in order to use Dual I.S. 2, you must use a compatible Lumix lens with inbuilt O.I.S.

This camera features a 20.3 MP Digital Live MOS sensor for shooting high-quality stills and 4K footage. The 3.2-inch, 1.62-million-dot, free-angle OLED touchscreen has a coverage rating of 100% for accessing menus and viewing your subjects with brilliant clarity. Use the 3,686,000-dot electronic viewfinder, which also has a coverage rating of 100%, for viewing your scenes comfortably, even in bright lighting conditions.

The Panasonic Lumix GH5 captures JPEG and RAW photos at a 6K and 4K resolution at 30 fps and 60 fps, respectively. Additionally, it can shoot 4K videos at a 4096x2160-pixel resolution at up to 25 fps. The Venus Engine image processor renders stills and 4K footage with an impressive combination of speed and quality. You can shoot pictures continuously at a maximum burst rate of 12 fps.

In addition to the 5-GHz WiFi connectivity, the Lumix GH5 has Bluetooth 4.2 Low Energy and NFC technologies to transfer your captured footage and stills to devices with similar compatibility. The joystick located on the rear of the camera makes it easy to change most settings with ease, such as focus points. This gadget’s sleek, flat body profile incorporates both rear and front dials for an intuitive camera control. This camera is made of magnesium alloy with die-cast rear and front frames. Lending it durability is the extensive sealing at each dial, joint, and button. Because of this, the camera is also splash-proof and dust-proof, as well as freeze-proof by up to 14° F. This camera runs on an 1860 mAh DMW-BLF19 rechargeable Lithium-Ion battery pack.