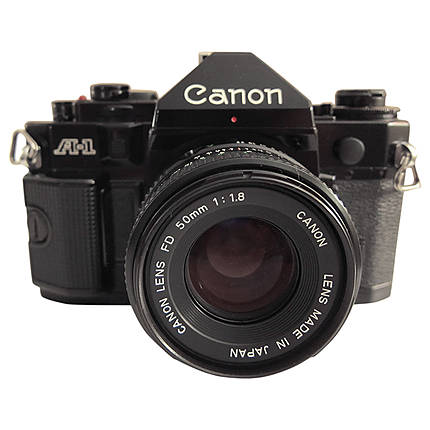 The Canon A1 SLR camera lets you relive the joy of analog film photography. It comes with the Canon FD 50mm f/1.8 lens, though, you may also use other Canon FD bayonet-mount lenses with it. The camera has five exposure modes, viz. shutter and aperture priority, programmed AE, stopped-down AE, AE flash, and manual. Its exposure center-weighted TTL metering works on a silicon photocell, which offers a working range of EV 2 to EV 18. This camera has a maximum ISO sensitivity of 12800 and shutter speed of 1/1000th of a second. The fixed eye-level pentaprism viewfinder with a split-image microprism rangefinder aids in composing scenes. A multi-slot take-up spool with a single-stroke lever is provided for advancing the film. Other features in the camera include a self-timer with an LED bulb, frame counter, battery check, an exposure lock, and exposure memory.

The Canon A1 camera comes with the Canon FD 50mm f/1.8 lens. It has six optical elements arranged in four groups. The spectra coating applied on the lens elements reduce ghosting and flare. This lens comes with an automatic diaphragm and a helicoid focusing mechanism. The camera includes five auto-exposure modes, two of which prioritize shutter and aperture to determine the correct exposure, one that helps in stopping-down photography, and the A programmed AE mode that automatically decides the appropriate setting for both shutter and aperture as per the lighting condition. The ISO range of the camera can be increased to 12800, which allows you to work in varied light conditions. This camera comes with an electronic focal-plane shutter that has a noise and damper mechanism to reduce the shutter-release sound. You may take pictures of moving objects by increasing the shutter speed to 1/1000th of a second.

This Canon SLR camera has a fixed eye-level viewfinder with a 0.83× magnification. It offers a screen coverage of 93.4% and 95.3% on the vertical and horizontal axes, respectively. A split-image rangefinder is also incorporated into the viewfinder to help you with focusing. The eyepiece diopter correction is fixed at -1 m. An LED readout in the viewfinder indicates the current shutter speed and aperture setting, as well as whether or not the flash is ready. It also warns about incorrect exposure.

The Canon A-1 SLR camera takes pictures with 35mm film rolls. You may see the number of exposed frames in the frame counter, which resets itself if the camera back is opened. The camera has a single-stroke advance lever with a 120° throw and a 30° stand-off angle. You may mount the optional Canon power winders A, A2, or MA to automatically load the next frame. You may also click two images in a single frame to induce a multi-exposure effect.

The Canon A-1 comes with a self-timer that can be used to delay the shutter release up to 10 seconds. On pressing the dedicated button on the camera, a small LED bulb tells you whether or not the loaded battery has any power. The memo holder at the rear allows you to make notes of the ISO speed, film type, and such other information. With the hot shoe, an external flash can be mounted on the camera. The mounted flash synchronizes with the shutter at 1/60th of a second. The camera's exposure metering and LCD are powered by a single 6V alkaline-manganese, silver-oxide, or lithium battery.