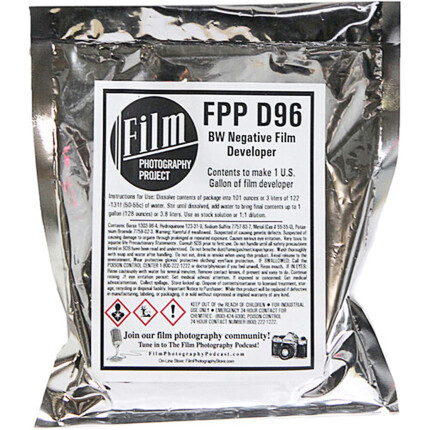 The Film Photography Project brings you FPP D96 BW negative developer powder in handy packages that makes 1 Gallon of developer when mixed with water. (You will also need FIXER to develop your film - not included). FPP D96 mixed may have a brown tint and may not fully clear - this is normal.

This developer has a very long life, when you mix the gallon, you can store it on a one gallon jug OR store it in 4 one quart bottles. If you store in 4 separate 1 quart bottles, as you use it and the contrast begins to lower, start a second fresh bottle, and save the first one for extremely contrasty lighting or films. We recommend using it as a stock developer, use it without diluting and pour it back into your quart container for re-use.

What about diluting and using as “one-shot”?

You can also dilute it 1:1, but make sure you use fresh, unused stock for this and do not reuse this combination, it is one-shot. This developer will begin to lose contrast with use rather than completely exhaust.

The package makes 1 gallon of developer, which is about a 50% savings over buying it by the litre and if you store it in 4 one quart bottles it’s like getting 3 developers in 1, stock for re-use, stock for dilution for one-shot and a lower contrast bottle of used stock for hard lighting and high contrast films!

We are testing with many films but have found a lot to fall within 7 to 8.5 minutes. Massive Developing chart has a D96 developer option as well. Many report getting at least 50+ rolls from this quantity.