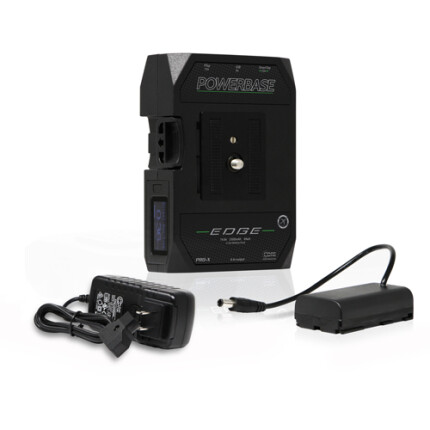 The Powerbase Edge is the "Swiss army knife" of battery packs. It can be used as a standard v-mount pack, an under-camera mounted small-form cine pack, mounted under a handheld gimbal, as well as many other uses.

The pack is outfitted with a 7.4v port for most mirrorless camera power demands, as well as two USB's 5v outputs, and two 14v powertap outputs, covering nearly all video production powering applications.

Comparing to small form cine mirrorless camera battery packs, the Powerbase Edge can provide up to 5x the power of those packs. Normal operational runtime on a Sony Alpha or Panasonic GH camera can exceed 8hrs, perfect for an all day shoot.

The Backlit Display shows Nominal Run-Time, percentage, and Grid when in standby.

The Powerbase Edge charges on all Core SWX v-mount battery chargers, as well as other manufacturers v-mount chargers such as Sony, RED, and IDX. In addition, the battery pack can be charged via p-tap with the PB70C15 charger.

As with all CoreSWX batteries offering, We have an integrated p-tap connector on the side of the battery allowing you to power any 12vdc device from this port which is a feature CoreSWX had since its first battery 17 years ago. With our  "ear to the ground", we also know how importance mobile devices are to production, and so we are one of the first companies to incorporate a USB port on the packs, providing accessible charging for your mobile devices.

All Powerbase Edge battery packs are now shipped in "Storage Mode". Storage mode reduces the chance of the battery being delivered in a fully depleted state of charge.

All of CoreSWX batteries that are travel safe have a Air Compliant label. We understand that our consumers are constantly on the go, therefore CoreSWX is dedicated to making there experience as smoothly as possible.

As with all CoreSWX battery offering, the Powerbase Edge has an integrated p-tap connector on the side of the battery allowing you to power any 12vdc device from this port which is a feature CoreSWX had since its first battery 17 years ago. With that said once again through extensive R&D CoreSWX is now offering a Smart Tap, a powertap / dap which will pull all battery data.