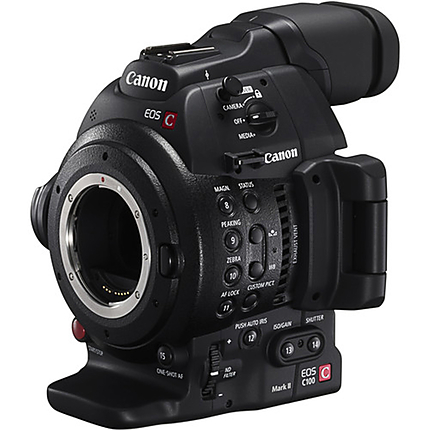 The  Digital HD Camera employs the same single Super 35mm Canon CMOS image sensor as the rest of the Cinema EOS camera family and includes the same innovative strategies that have established the outstanding image performance of these cameras. This 8.3 megapixel sensor maximizes the size of the individual photosite - each of which deploys two photodiodes to ensure high speed removal of accumulated charge, which in turn helps elevate the effective sensor dynamic range. Allied with innovative Canon signal extraction strategies that enhance the sensor signal to noise performance allows unprecedented elevation of the ISO setting in this professional Super 35mm camera, while always protecting its dynamic range.

The four 1920 x 1080 HD R Gr Gb B video components from the image sensor are pre-processed and then sent to the DIGIC DV 4 processor for advanced video processing. This includes separate interpolation of the sparsely sampled R and B HD components to form full frame 4K for each. The two green HD components are also interpolated to form a single full frame 4K Green component. These three 4K RGB components are then down-sampled to create a set of YCC 422 HD components that have high MTF, improved edge transitions, low false color moiré, and enhanced overall color reproduction. These components are further processed preparatory to sending them to the AVCHD and MP4 codecs.

The  Digital HD Camera enables users to record in both the AVCHD and the MP4 recording formats in a variety of bit rates (up to 28 Mbps and 35 Mbps, respectively), resolutions, and frame rates, including 59.94p, to address practically any production need. Both formats have their own particular advantages. AVCHD is a professional standard that enables long-duration recording of full HD using moderate total data capacities. MP4 has advantages for Web and smartphone sharing. Both formats are easily accepted by most nonlinear editing applications. The  camera's dual SD card slots can record in either or both formats simultaneously and can convert AVCHD and MP4 files into smaller MP4 files for web upload.

The  Digital HD Camera can provide slow and fast-motion video effects when recording in the MP4 format. Sound is not recorded, and the feature is not available during double-slot recording. Slow and fast-motion playback speeds can range from x0.4 slow up to x2.5 fast.

This feature allows for converting an AVCHD or MP4 recording on the SD card in the  camera's main slot into a 3 Mbps (640 x 360) MP4 file on the SD card in the alternate slot. This gives users a smaller file that is easier to transmit. MP4 conversion is not possible for MP4 files at 35 Mbps and AVCHD files at 28 Mbps.

OLED (Organic Light-Emitting Diode) is a newer display technology that provides vivid colors, high contrast, and dramatically improved responsiveness compared to traditional LCD screens. The 3.5-inch 1.23 megapixel OLED display on the  delivers virtually 100 percent field of view coverage, wide and faithful color range support, and improved viewing even in bright sunshine. The  camera's OLED screen has a new hinge design to help maximize monitoring versatility. The design allows the panel to fold shut when stowed and protect the OLED surface. It can then open 180 degrees to reveal function keys and a joystick, or open further to 270 degrees to deploy against the side of the camera and provide monitoring for directors, producers, or other production personnel.

Larger and totally redesigned from what was featured on its predecessor model, the  camera's EVF (Electronic ViewFinder) uses a 0.45 inch 1.23 megapixel color panel surrounded by a large professional-style eyecup like the one used on the Canon EOS C300 and EOS C500 Cinema cameras. In addition, the new EVF has a 68 degree tilt angle, allowing it to be used more effectively in a variety of shooting situations.

A standard feature of the  Digital HD Camera, Dual Pixel CMOS AF (AutoFocus) ingeniously deploys the two photodiodes within each sensor Photosite to facilitate a powerful phase difference detection that provides measurement data that ultimately controls the EF lens focusing system helps ensure that proper focus is always maintained, even in unpredictable "run and gun" news or documentary-type shooting situations. Dual Pixel CMOS AF operates within the center portion of the frame and is compatible with more than 100 Canon EF lenses.

By popular demand, the  HD Digital Camera can capture 1920 x 1080 HD video at a 59.94p frame rate (59.94p is available in MP4 mode at 35 Mbps and in AVCHD at 28 Mbps). This frame rate can provide captured video with a very "smooth" look that is useful for sports and news applications.

MP4 and AVCHD video files (and still images) can be wirelessly transferred to a selected FTP server. This feature is particularly useful for transferring time-critical video for news and for backing-up files. The feature uses the 5GHz band for quick, reliable file transfers. Up to 100 files can be selected to transfer at one time.

A monaural "mono" microphone is built into the body of the  Digital HD Camera for the capture of reference audio, for spoken notes, or as an aid to synching sound in post. This microphone works only when the removable top handle with twin XLR inputs is not attached.

Many filmmakers prefer to shoot in Canon Log to protect the integrity of the total dynamic range of which the image sensor is capable, which, in turn, can provide greater latitude in post-production grading processes. As the picture is being monitored during Canon Log-enabled shooting, however, the image seen will not accurately represent its final "look". A built-in LUT (Look-Up Table) in the  can be applied to facilitate viewing the video live on a monitor connected to the camera's HDMI® output in a more visually appealing Wide DR (Dynamic Range) or BT.709 (television standard) color space. The Canon Log LUT feature can be turned on or off in the camera's menu.

There are three start/stop record buttons on the  Digital HD Camera (one on the front of the camera, one on the removable pistol grip, and one on the detachable top handle) and all are red for bright visibility. Besides aiding with quick identification, this industry-standard color helps reduce the chance of accidentally stopping a recording.

The  Digital HD Camera features a compact design for comfortable use by a single operator. Subtle but important modifications for smoother operator comfort include indentations around control buttons and a recessed power switch.

The combined performance of the camera's Canon Super 35mm CMOS sensor and DIGIC DV 4 Image Processor achieve a very high signal-to-noise ratio that enables recordings with great detail and dynamic range even in minimal light. This advanced performance yields a maximum ISO speed of 102,400 and a wide dynamic range with up to 12 stops.

Digital filmmakers preferring complete manual control have that ability with the Canon  Digital HD Camera. Shooters can also create, save, and recall custom picture settings, camera functions, and display options. Highly effective built-in Focus Aids to confirm critical focus can be displayed on both the tilting EVF and folding OLED monitor, including Peaking (white, red, blue, yellow) and a magnification function that can be shifted to 25 locations across the image. Also included is an Edge Monitor feature, which shows red and green displays at the bottom of the OLED panel with three red focus-check areas shown. The green waveform shows overall focus of the image while the red waveform shows the focus status of the focus-check boxes. Through this dynamic focus feedback technology shooters can intuitively tune focus or quickly change the zone of focus.

The removable top handle on the Canon  Digital HD Camera integrates a built-in tally light, stereo microphone, dual XLR audio inputs for stereo recording, and a mic mount. Audio is captured in 16-bit 48 kHz linear PCM format or Dolby Digital. A compact array of audio-level dials and channel/input switches built into the handle (under a hinged clear plastic protective cover) enables shooters to select signals from the built-in stereo mic or mics attached to the XLR inputs and adjust the gain independently on a channel-by-channel basis. Users can also power a wide range of audio-capture devices with the XLR inputs phantom power supply. 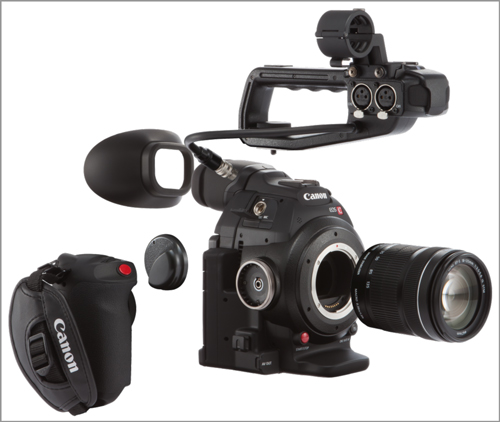 HDMI® Out with Time Code

The Canon  Digital HD Camera includes a screw-locking HDMI connector for output of live HD video from the camera to monitors or other devices. The camera's HDMI signal features superimposed SMPTE time code for attachment to recorders or other third-party devices.

An optional Canon RC-V100 Multi-Function Remote Controller can be connected to the camera via its remote control cable to adjust image quality and other settings from a distance. This can also be a handy feature when shooting from a crane, jib arm, or mounted remotely in some other inaccessible location.